How to (Almost) Write a Chapter

I feel really lucky that my literature professor at PSU allows students to write  a creative piece that ties into the literature in some way for our final paper. This is as opposed to a traditional literary analysis paper. I met with her a couple of weeks ago to talk through ways that some of my thesis writing might work for this final project. Classic way to kill two birds with one stone. (Sorry, birds.)

I haven't posted a thesis update here in a long time. I've been stuck on the thesis for several months, but this end-of-term for my literature class is a great motivation. I hope this will help me push through my writer's block so I can get going againg.

Have I mentioned before how daunting it is to write in "the long form"? (Not that essays, short stories, and poems aren't also daunting, but a 120-page thesis is, well, longer. And harder.  At least for me.)

Several days ago I went back through some old drafts for ideas, and realized that I really liked a lot of what was in the old drafts. I started printing out pages to see what I could pull from the older drafts for this newer draft. Then I cut the sections apart in the older drafts. Then I pinned each section on the wall to see what I had. Like this: 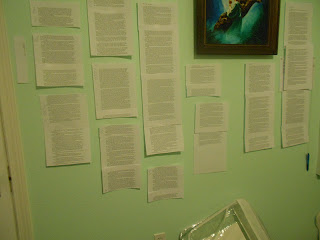 So far what I could see was a lot of different little pieces of the story. I had hoped that the writing fairy would "prang" me on the head at this point, and that the chapter organization would suddenly become clear, but it didn't.

I carried all the pieces around for a couple of days. Reread them. Wondered what I was going to do with them.

This morning I woke up extra-early. Thought of some lines in the middle of the mish-mash that might serve as a starting place. Came downstairs and started laying the pieces out on the table. 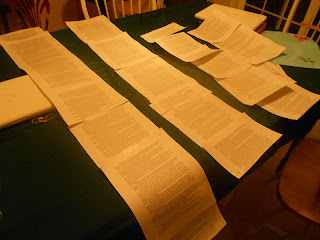 Low and behold, the mish-mash jigsaw puzzle resolved itself into three columns plus some left-over sections off to the right there, which I'll save for later or eventually recycle.

Then the three sections, plus a couple of transitions between them, morphed into one l-o-o-o-n-g piece. It took up the entire diagonal length of the living room! 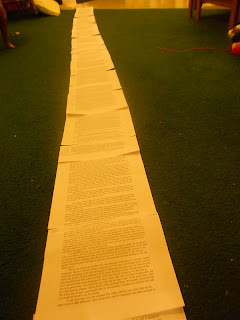 Woo hoo! A structure! Maybe. Now I'm going through refining, fine-tuning, deleting a paragraph here and a paragraph there. Some of the sections have big (writing) gaps between them. They need some transition work. Maybe. Maybe they're beyond hope. 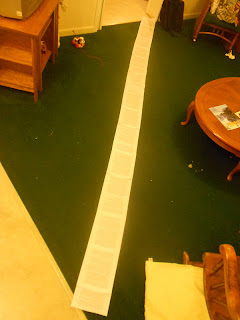 Can I get it finished in time for Thursday night's class? Plus a page or so of analysis and comparison to the literature we read for the course? Hmmm...time (not much of it left) will tell...
Posted by Kathy Haynie at 8:22 PM

I always work best at the last minute...bet you can, too. Looks like you're on the home stretch ....you can do it!