Tonight, I give you two hiking songs. 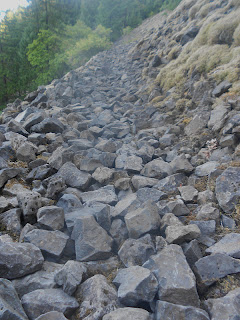 In case you didn't know...
*PCT = The Pacific Crest Trail. Haven't heard of it? Go google it right now, and thank me for saving you out of your ignorance.
*skeeters = cool hillbilly slang for "mosquitoes"
*talus slopes = Mark and I helped repair the trail along a talus slope back in September. You get good views on talus slopes because all the rocks = no trees.


Wasn't that sing along fun?
I composed the words two years ago when Mark and I hiked into Jefferson Park (not really a "park," but an incredibly beautiful, park-like bowl at the base of Mount Jefferson) in August 2009.


Here is a photo of the trail going across a talus slope. 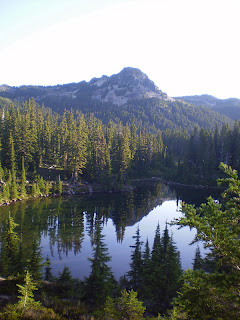 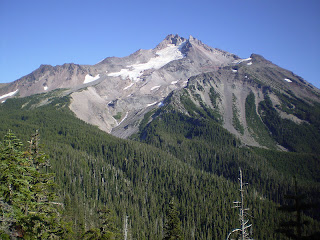 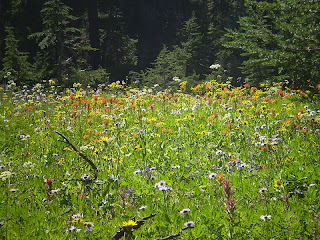 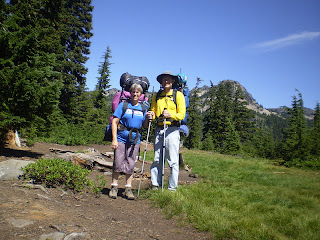 Now let's try "The Whiny Hiker Song."
We made up the tune, so you'll just have to kind of guess and hum along.
You get to improvise the middle line and make up as many verses as you like.

This song can go on indefinitely, with many improvised middle lines.
...My tummy hurts and my socks won't stay up...
...The flies are a pain and Grandpa's jokes are stupid...
...The food's all gone and I want to rest...
...etc...
You get the idea.

This song was spontaneously composed on our first backpack outing with the twins. They were seven years old and...whiny. At least some of the time. We tried to inject some humor into the situation with The Whiny Hiker Song. They weren't too impressed at the time, but now we all sing it with gusto on every hike. The twins and Josh are anxious to teach it to their younger cousins when we begin taking them on backpack outings, too.
Twin Lakes with the Twins 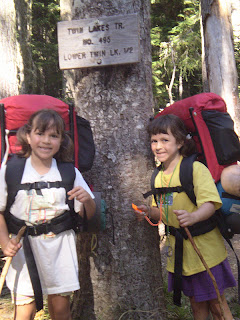 Kat and Sarah on the way to Twin Lakes, August 2009 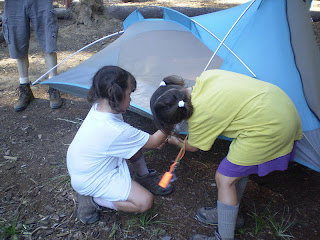 Setting up their tent at Lower Twin Lake, August 2009 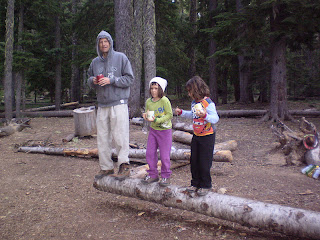 Hot chocolate with Grandpa on the bouncy log, August 2009 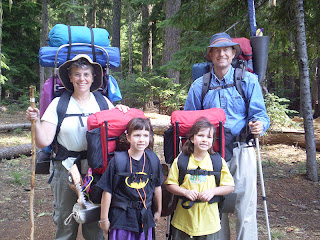 Me, Sarah, Kat, Mark
Ready to hike back to the trailhead, August 2009 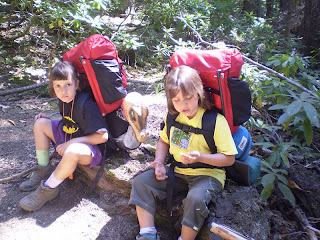 I confess I'm a bit of a whiny hiker myself this evening. Feeling burnt out and blah. I need to nourish my soul with some time in the woods. Tomorrow will be a holiday, and the weather forecast is...mostly clear. Mark and I have promised ourselves a hike in the morning, no matter what! I hope the other hikers won't mind a little singing!
Posted by Kathy Haynie at 9:39 PM

Great hiking songs! When we hiked with some "whiney-I'm tired-my feet hurt-my tummy hurts" little ones last fall, I started a rousing rendition of Old McDonald's Farm...letting the kids pick strange critters (and sounds) to add to the ol'farm. We sang and sang along the way, and amazingly the whining stopped. Other hikers....just smiled and kept on going. :) Have a great hike today!