This morning I had to run to the store to pick up a few last-minute ingredients. I was intrigued to see what other people were buying on Thanksgiving morning. I saw people with bread and milk, roasting pans, things you would expect on a last-minute shopping trip on the biggest feasting day of the year.

But then I saw a guy walking out of the story carrying a...curtain rod? Hmmm...I guessed he and his wife were hosting Thanksgiving dinner and they had a bunch of people coming over and she made some new curtains that she wanted to have hung before everyone got there. Right? Why else would he have been walking out of the store with a curtain rod on Thanksgiving morning?

And then there was the guy in front of us in the checkout line. He was buying a steering wheel cover and floor mats for a car??? On Thanksgiving morning??? Was his car looking a little too cruddy...and maybe he had to transport someone picky, like maybe his mother, to Thanksgiving dinner somewhere, and he wanted his car to look a little better? Holly and Maleena both had a better idea (when I told them about this later)--they said he probably was on his way to a gathering where he would see someone that he was supposed to give a gift to, maybe a 16-year-old kid who just got his license or something. Sure, that made lots more sense.

So much for my shopping trip!

Mark and I joined up with the Jenson-May clan for their annual "Huff and Puff Before You Stuff" event at Clackamas Community College this morning. Here are a few photos. You can see a shot of the entire group on Dorothy's blog. 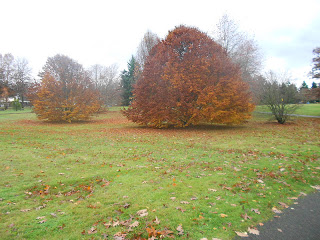 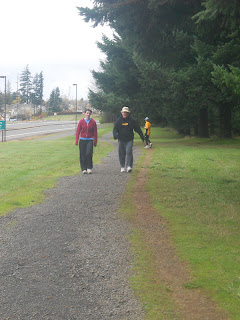 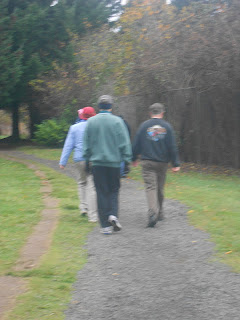 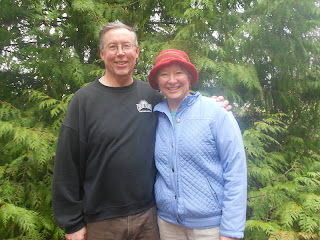 I love Dorothy's new hat - she's been busy with her crochet hook lately! 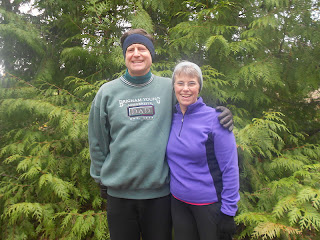 My best hiking buddy ever.

Back at the house, we were pulling together all our different recipes for our special meal. Mixed results.

The turkey recipe with the apricot glaze was delicious. It was the best of the recipes we tried. And the roasted asparagus was yummy, but we've enjoyed that recipe several times before.

On the other hand...
The dressing was good, but a little dry. The cranberry chutney was a little, um, strange. The bread pudding was runny, and the baklava...sadly...was soggy.

But the company was wonderful, and we had a happy Thanksgiving anyway. Arora started feeling better and made darling turkey handprint place mats for us. Mark and I were able to make visits to Maleena, Max, and Hunter in the afternoon, and then we went to see Julia and Scott in the evening.

We had a happy day, and I hope that you did, too. Happy Thanksgiving!