Winter was long and dark.

I grieved my mom's placement in memory care. (It all seemed to happen so fast at the time. Now, looking back, I realize that she was heading into a decline for many months prior to the placement. It can be difficult to see the trajectory when you are living it every day.) (And in January, after 5 months in memory care, she "graduated" into assisted living. She loves having her own apartment. No stinky cranky roommates. A door she can lock. Her own refrigerator. A sign-out/sign-in book that lets her leave and walk a mile or more.) For months I walked a tightrope of guilt that I could no longer keep her safe in my home, and relief that I no longer had to be her caregiver. I felt judged by a few people, but mostly by myself.

I grieved--am still grieving--the estrangement of one of my daughters. It caught be off guard. Should have seen it coming, I suppose. It reminds me of the day Joe and I moved to Oregon, moving away from his parents in southern California. His mother, Eva June, stood in the driveway as we waved goodbye. I can hear her voice wailing, "They've changed the rules! They've changed the rules…" Meaning that in her world, adult children were supposed to live close to their aging parents and care for them, as she had cared so carefully for her parents. We were moving over 1,000 miles away. Escaping. Anyway, that's how I feel about this change in mother-daughter relationship. I want to hold Eva June's hand and wail with her, "They've changed the rules!" I had not known, previously, that such a thing was possible. (Not that I expect my adult children to live near me. But at least stay in touch. I had not known it was possible to walk out of a parent's life.)

Grief silenced me for months.

Sometimes silence is the only way through.

Yesterday, something seemed to turn within me. Mark and I had promised ourselves a day of yard work, but we were true Oregon slugs and didn't get outside until 3:00 pm. Among other chores--it feels so good to work hard!--I pruned the Japanese maple. It had grown into a shapeless bush, a large red leafy mound in the middle of the lawn. I probably cut away 1/3 of the growth. (I want to think of something creative to do with all those weirdly-twisted branches. They are so cool.) 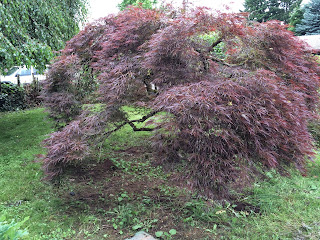 Now the tree has light within. Instead of a lump, it is a lovely tree with shape and sweet interplay of light and shadow.

Mark and I dragged the plastic off the garden bed. We've created our little garden in the front lawn eight years ago, and only one other time have we planted this late, a fact of timing that triggers shame and guilt. For what? Who cares what week the garden gets planted? Just me heaping blame on my own head. So silly. 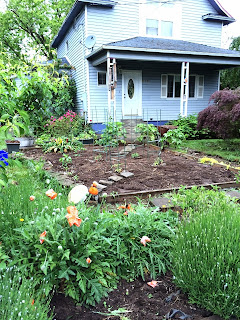 Woke up this morning planning to water the garden and found that God had already done that chore for me. Robins are cheerio-ing each other.

I feel, finally, the rising juices of spring within me.
Posted by Kathy Haynie at 10:00 AM 2 comments: