My sweet dad passed away last night. Mark and I feel so blessed that we were able to be with him and Mom when he died in his own bed at home. Polly was with us earlier in the day, and she took some wonderful photos. You can see them here. 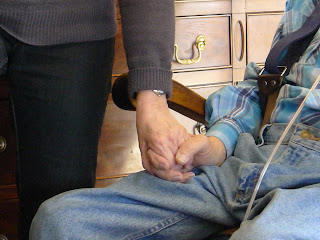 I am deeply contented this evening.

The church youth group had an evening of line dancing. Kids from 3 different congregations (we all meet in the same building, but at different times) lined up in the gym and danced away. Afterwards we stuffed them full of awesome refreshments. 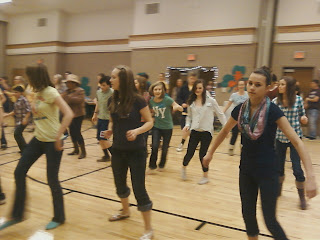 The best part of all...I got to dance alongside my oldest grandson, Josh! Makes my grandma-heart so, so happy... 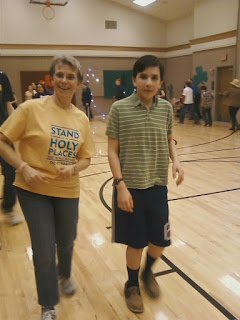 Last Saturday I attended a writing workshop sponsored by the Oregon City Library. I spent a wonderful afternoon in the company of women writing bits and pieces of story. Our workshop leader was Trista Cornelius, one of the writing teachers at Clackamas Community College. She shared excerpts from memoirs* and then issued writing prompts based on something from the memoir.

One of the prompts involved lots of sensory details from a childhood memory. She suggested writing something that had to do with a school cafeteria, but I have almost zero memories of school cafeterias as a child, so I went with the sensory details of an early beach memory. It is set in Morro Bay, California, the town I lived in until I was 14.

There was a narrow strip of beach beneath the towering stacks of the PG&E electrical generation plant. It was not a sunny beach because it was tucked between the shadows of the PG&E stacks. We called them smoke stacks, which was incorrect, but calling them steam stacks would have sounded funny and it never occurred to us. No, it was not a sunny beach—if the sun wasn’t behind the PG&E stacks immediately to the south, it was behind Morro Rock a quarter-mile to the north—but we went there often, I think because it was a good place for my mother to read her books. Not that they had to be read in the shade, but the riprap--huge black rocks stacked between the beach and the harbor road--cut the constant northwest winds, and she didn’t have to worry about my brother and me drowning ourselves in waves because there weren’t any.
The little beach was just the right size for a four-year-old, and when my mother took us there so we could play and she could read, I experienced the sense of enclosure that comes to little children when they are cupped within a bit of the world that has become its own place altogether. The gulls dipped and swung overhead, their cries part of the ceiling of sky. Mostly I patrolled the border of wet sand, molded into hard little ridges by the lapping wavelets in the harbor, gathering brown and gray periwinkle shells only a little smaller than my thumb. My mother, sitting on her beach towel with a novel in her hand, was far enough away that she couldn’t hear me narrating my own story in real time, a third-person drama that interested no one but me.
“She walked along the water slowly,” I intoned, watching my bare feet as the wet sand made little sucking noises with each step. “She was looking for shells, and pretty soon she found one.” Another shell for my pocket. “Her brother was at the other end of the beach and her mother was reading a book.” The wind blew my white-blonde hair across my face and I brushed it away. “Then she found another shell.” It was a narrative that I carried inside my head most of the time, but the only chance I had to articulate it aloud was here at the little beach, where the gulls and the wind and the quiet roar of the PG&E plant covered my voice and made me invisible.

Trista also highly recommended Writing Memoir by Judith Barrington for those of us delving into memoir.
Posted by Kathy Haynie at 9:03 PM 1 comment:

I was hanging out with the teenage girls at Church during our youth group on Wednesday night. It was a lovely, mellow evening. The girls were using fabric markers to decorate pillow cases with this year's theme and visiting with each other.

I was glad to have some time to just chat with some of the girls. We were very laid back.

Somehow Sydney and I got to talking about texting. I told her how reluctant I had been to begin using a cell phone, and that I had only learned to text so I could communicate with my family when I went on a 50-mile solo backpacking trip 5 years ago.

She looked at me kind of funny, so I said, "You know, because I could get cell reception up on the ridges. I'd send a text message to my daughter that told her where I was." [Mark was at scout camp that week.] "So if they didn't hear from me in a day or so they would know where to start looking for me," I explained.

Sydney looked at me funny again, and then she said, "You know, Sister Haynie, you're not very grandma-ish."

I made some comment about my 23rd grandchild just being born a couple of weeks ago, and she said, no, that wasn't what she meant.

"My grandmother does things like, you know, wash the dishes, clean the house. Vacuums. She vacuums a lot," Sydney said. And she added, "You're not really like that."

I took it as a compliment...the nicest one I'd had all day. 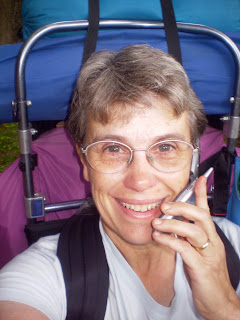 Calling my mom from the PCT
Aug 1, 2008
Wishing her a happy birthday
Posted by Kathy Haynie at 7:54 PM 3 comments:

Be of good cheer 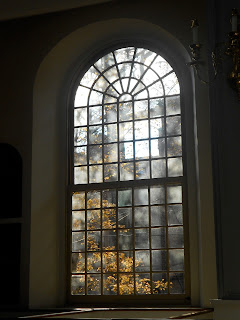 I try to pray every morning.
It has become a habit that I deeply value - helps me get the day started right, refocuses my thinking, slows me down to pay more attention to thoughts that come, inclines me to respond to those little nudges that guide my day.

Here I am, nearly 60 years old, still learning how to pray.
It's not just a long list of requests, you know?
I'm trying to do more listening and less talking during prayer.

So a couple of mornings ago, I was feeling pretty blah, a little overwhelmed, maybe just a little worried about some dear family members slogging through life...

And the answer that came? Be happy.

That was all. Just "be happy."

Which is a choice, you know. Not something that happens when the bluebird lands on our shoulder, oh no, but an honest-to-goodness decision to look around at the messiness of this mortal experience, and be happy anyway.

When Christ said, "Be of good cheer"--which he said quite a few different times--he wasn't just giving us a little wave and saying, "Have a nice day."

Twenty years ago I was a senior at Lewis and Clark College. A senior in college with five children and an unhappy marriage. Hanging on.

Twenty years ago I didn't have a cell phone (no one did) or email (again, no one did).

I was a senior in college, majoring in English, and I had snagged a prestigious spot (in English-major circles) on the editing board of the college literary magazine. Ooooh. We met once a week, on Monday afternoons.

I had five children and I was a senior in college and I was on my way to the lit mag meeting but I stopped at a phone in a corner of the student union to call home. I didn't have a cell phone (no one did), but I knew about this phone I could use for free (just dial "9"), so I called home to check on the kids.

Mothering-by-phone. Make sure they had a simple supper underway, sort out any sibling conflicts, make it look like I was still being a mom even though I was a senior in college with five kids at home.
(And an unhappy marriage.)

No one had cell phones.

Twenty years ago it was a different world, a world where you couldn't always get ahold of someone, even if you needed to. I could walk across my college campus at five o'clock in the afternoon, and not one of my children could call me. Not one. I was so sure that everything was fine. I was just calling home to check in. What was the worst that could happen?

Remember telephones? With curly cords? Attached to the wall?
The alcove in the student union was painted gray. The telephone and its curly cord was attached to a gray wall.

I didn't have a cell phone. No one did. My mind went gray and blank. Like the wall.

On my way to the parking lot, before I climbed in the car and drove to the hospital and my daughter, I stopped at the room full of lit mag editors to tell them I couldn't make today's meeting.

On Tuesday, the next day, (twenty years ago tomorrow), I bought a pager.
Two weeks later my unhappy marriage imploded.

I guess what I'm trying to say is this:
The world has changed a lot in twenty years, and so have I.
You might say this was all a long time in the past.
But in some ways, it has only been the tiniest of blips.
In some ways, it could have happened yesterday.
Posted by Kathy Haynie at 10:18 PM 4 comments: