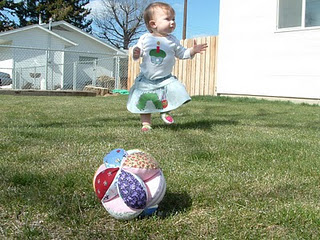 Ahem: a little tribute to fabric balls. You know, the kind I like to show off here on the 'ol blog. There's a button on the right, or you can click right here to read a dandy step-by-step tutorial on how to make them.

I learned how to make the fabric balls about 30 years ago at a Relief Society meeting. That was back in the days when Relief Society was held on weekday mornings, and we'd sit around and make things together. Someone gave us the pattern...I can't remember who.

I made a few more over the years, but mostly the pattern just sat in my closet. Then grandchildren began to have their first birthdays, and I hauled the pattern and the scrap box out and began making fabric balls again.

During one sewing spree in March 2010, I documented each step with a photo, and wrote up the steps as a tutorial. I had seen some great tutorial examples on Polly's and Katie's blogs, so I had some idea of how to (try to) do it right. Polly helped me get the pattern into a format that would show up on the blog, and I hit the little "Publish" button.

Since then, the thing has gone viral, if I do say so myself. That one post is by far and away THE most popular post on my whole blog. Just today it's had 13 hits, even though I posted it nearly 20 months ago. Since it went up, that post has had 5449 hits. And counting. That's about 300 hits per month / 10 hits per day. Give or take a few.

The little map gizmo on the side of the blog shows up with hits from South Africa, Argentina, Brazil, Russia, Viet Nam, Singapore, Tazmania, Thailand, all over the Middle East, Australia, all over Europe, many, many places in Canada and the United States. We're talking a worldwide movement here: Occupy Fabric Balls.

Someone from Australia emailed me several months ago to ask if she could buy the pattern for a business venture. I told her I didn't own it; I am just the vehicle for sharing it with the world. It was freely given to me, and I freely pass it along.

I have always known what a genius toy this is. It's soft (think non-damaging to furniture, lamps, and other children's heads). It can be made for free from fabric scraps. It is intellectually stimulating, with an interesting geometric design. It's developmentally perfect for little fingers to grab, when other balls are too big and slippery-smooth for them to latch on to.

Now I teach the Church Nursery on Sundays. One of my little dynamos, Ryan, has a default arm action whenever any toy is in his hand: THROW. We had a lot of ducking going on until I brought in a couple of fabric balls and some bean bags. Now the nursery is safe and peaceful again. Ryan happily shares the balls and other toys. One more victory for fabric softness and goodness.

I'm telling you, someday in the future there will be a tense political moment. Nations will be poised against nations. Troops will be amassing. And then, during the last-ditch mediation session, one of the negotiators will notice something in the aggressor's office. Something small and round and brightly-colored in the corner of the office will catch his eye.
"General ___, what is that?" the negotiator will ask, pointing at the object with a stern glare.
"Why, your honor, it's my son's fabric ball," the General will reply. "He was here playing in my office yesterday, and he left it behind."
At that, the Major Domo from the other faction will look sharply around at the small, bright fabric object. "A fabric ball!" he will say. "My little girl plays with a ball made of that same design!"
"Oh yes," several more voices will chime in, "our children play with fabric balls, too. They are handmade from an old tutorial off the Internet."
And so it goes...the crisis is averted as everyone remembers why we are really here -- to love and nurture our children, and to help them to have joy and gain skills as we guide them in their growth.

Why, just today, another Fabric Ball post came up on a blog. Check out Rachel's lovely ball, here. She made it, of course, from my tutorial. I'm telling you, that's what Grandma Kathy likes to hear.

Ha ha! It looked so EASY, but it was way more time consuming than I thought it would be to make. However, it is a great design for a soft ball. Well worth the effort. :)

Fun to see a picture of my little cutie show up in my reader. It's been fun to see your pattern be so popular.

I liked your military fabric ball story. Maybe its time to write a couple of children stories? From what I have been reading (many children books of late) they have a lot of thought put into them.

Look at you, Mom. Saving the world one fabric ball at a time.

Hahahahahaha Great story! Congrats on that many hits! Wowza! It's a great pattern! They've become quite popular with etsy shops devoted to just fabric balls. Some people on etsy just sell the pieces, sewn but not stuffed.