This week's homework for my PSU class:
Look in the mirror and write a self-portrait. Try to include some nuance or essence of self.

I never did wear braces. My brother’s teeth were worse—his two front teeth met at a 45-degree angle smack in the middle of his grin—and my parents could only afford one contract with the orthodontist. I never minded much, especially after I watched my own children suffer through gouged lips, tender gums, and aching jaws. I am a little self-conscious about my teeth sometimes, but if you ask me, I will always deny it.

My father used to call me an ankle-biter. He said I wasn’t tall enough to reach much higher, but I was spunky enough to bite. I’m not that short. For years I said I was 5’2” to go with the song, “Five foot two, eyes of blue, hoochy koochy koochy koo, has anybody seen my gal?” But I’m really almost 5’3”, and since the extra inch tips the BMI calculator slightly in my favor, I claim it nowadays. As I balance on the teeter-totter middle point of middle age, I need every inch. My mother, after all, is beginning to grow shorter. It could happen to me someday, too.

I don’t like my knees. As a kid growing up, they were always too bony. I wanted dainty, petite knees, but mine stuck out, all knobby and unladylike. In 2005, I injured my right knee when I fell off a stepstool on the front porch, when Mark and I were remodeling the house and I was demolishing the front door frame that afternoon. Stupid stepstool. Most of the time that knee doesn’t hurt, but I can’t do poses at yoga class that make my knees flex a lot, like that one where I have to squat on my heels and put my elbows inside my thighs. I always end up quitting halfway down.

Sometimes I stand in front of the mirror and pretend I’ve had a facelift. I put my fingertips along my jaw line and pull the skin up toward my ears. That jowly saggy spots at the corners of my chin disappear and my face regains the oval shape I took for granted as a teenager.

I would never really get a facelift, for so many reasons: vanity, expense, pain, self-consciousness, and the good that could be done with the money instead. I don’t plan to ever dye my hair either, but for different reasons. I think I’m the only teacher at my high school that lets her gray hair show, and sometimes I wonder what other people think of me. But I know myself. I wouldn’t keep up with the touchups, and I think that gray roots look waaaay worse than hair that is naturally gray. So I call the gray hair “my wisdom,” and I pretend to be proud of it. My hairdresser flatters that me I’m going gray attractively, “unlike so many other women,” but I’m never quite sure whether to believe her. But then, what reason would she have to lie? She could make more money if she convinced me to cover the gray. At age seven the hair was white-blonde, at age seventeen it was honey-brown, and at age fifty-seven I pretend that the lighter patch over my left forehead is a blonde streak. I know it’s really gray but this is one of those helpful deceptions.

The eyes haven’t changed. Hazel, green-gray, friendly, steady. At least that’s what I say. They are the same eyes that look out of the photo of me, taken 40 years ago at age 17, the eyes that look back at me every morning from my dresser. 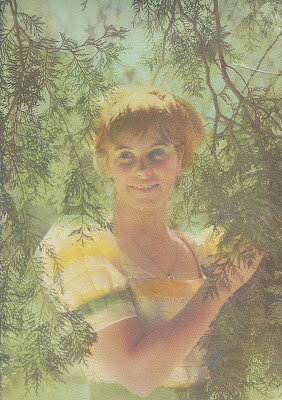 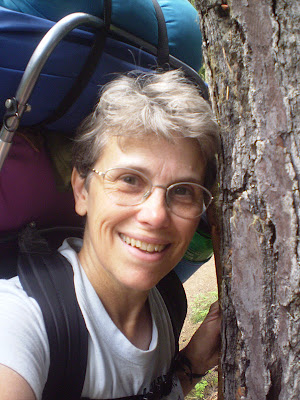 Self-portrait taken while backpacking: me, age 54.
Posted by Kathy Haynie at 7:19 PM

I love this post! Very nice. I'm glad you don't dye your hair. I find it ridiculous when people dye it to get rid of the gray. You earned that gray. Plus I know some people that have dyed jet black hair (imitating their younger self)..and wrinkles. Everyone knows they're lying. It makes them look fake. :)

This was a great post and a terrific writing prompt. You should consider assigning it to some of your students sometime and see what you get back. It's fascinating to learn what other people see in themselves ( the good and the bad) that many of us might never notice.

Thanks for sharing Beautiful Mother!