One really delightful surprise: we stopped at a rest stop on the Wyoming-Nebraska border and took a short nature walk to a fascinating archaeological dig. They were actively digging from 1984-1999, and then they built a building over the dig so you can see what it was like. They catalogued artifacts for 20 feet down, all the way to bedrock, going back in time to over 10,000 years ago.

The drive to Kearny (pronounced CAR-nee) went smoothly. We passed the time reading Hattie's Big Sky by Kirby Larson. It's set in Montana, but it seems to fit this part of our journey. (Thanks for the suggestion, Annemarie.)

Since it was Sunday, we had filled up on gas in Laramie Saturday night so we wouldn't have to make anyone else work on the Sabbath. We had plenty of food in our cooler, so we felt pretty self-sufficient. Keep this fact in mind as I tell you about the rest of our day.

About an hour out of Kearny, we crossed the time change into Central Time. Darn! It was almost 9:00 pm when we pulled into our campsite at the Fort Kearny State Recreation Area. We had hoped to get in a little earlier, but there was still plenty of light for setting up camp. It was lovely and grassy, with little lakes scattered all throughout.

Part of our conversation went like this:
ME: Sure is hot and muggy.
MARK: Sure is.
ME: Let's leave the rain fly off the tent tonight so we can maybe catch a little breeze.
MARK: But what if it rains in the night?
ME: We'll get up and put the rain fly on then, but it's too hot and muggy now.
MARK: (no comment)
ME: Mark, look over there! (Pointing to area around the perimeter of the campsites, where the grass hadn't been mowed.)
MARK: What? What are you looking at?
ME: Just look...over there...
MARK: Is there a sign or something?
ME: No, just look.
MARK: Oh, I see it.
BOTH OF US AT THE SAME TIME: Fireflies!!
ME: It's just like Disneyland.

We were delighted with the flickers of the fireflies and speculated whether or not we would be able to capture their magical lights with our new camera.

We were just getting ready to take a short walk through the camp area when a woman pulled up next to our site in her car. "Are you tent camping?" she asked. We nodded, and she went on. "I just want to let you know there's a severe thunderstorm warning. I always like to let all the tent campers know." She started to pull away, then added, "If it gets too bad, you can take a book and sit in the shower house. That's what I do." I figured she must be the camp host. We chuckled to think of ourselves sitting in the shower house with our books - haha! - and proceeded with our short walk.

Off in the distance we could see dispersed flashes through the clouds. The lightening was far away, and where we were, it was just hot and muggy and still.

Back at our little campsite, Mark tried again to convince me that we should put up the rain fly. The breeze was picking up a little, and I had to agree that it would be a major pain to try to put it on the tent if it was really windy. I had visions of it flapping around in the wind and us struggling to get it hooked on. The breeze picked up more, and, beginning to feel a little nervous, I agreed with Mark that it was probably time to pull out the rain fly.

But the wind was already getting stronger. Even as we were trying to get the rain fly on, it was beginning to blow around and we couldn't tell if it was inside out. Suddenly I heard something I couldn't figure out. "Mark," I said, "listen. Is that rain on the lakes or the wind blowing the tree leaves?" Mark gave me an irritated look and replied, "Does it matter? I think this [rain fly] is inside out."

I was just unclipping my inside-out corner of the rain fly when a sudden gust blew through. Our sweet little backpacking tent with it's aluminum poles was flattened. All my jolly thoughts of camping through the night blew away with the wind. Suffice it to say that I quickly knew that there was no way our handy-dandy backpacking equipment was going to be up for a fist fight with a genuine Midwest severe thunderstorm. Enough already.

We grabbed gear and crammed it into the nooks and crannies of our way-too-full car (more about that later). Somehow we got it all in, in spite of the the wild winds and the feeling of chaos we felt in our hearts. We leaped into the car, panting, just as the rain deluge hit our campsite.

We tried peering out the windows, but 1) they were all fogged up from the humidity and our panting, and 2) it was pitch black outside except for every other second when huge strobe lights pulsed and then went black again.

"Did we get everything?" Mark asked.
"I think so. Except the bug repellent. It must have blown off the picnic table."

Mark turned on the headlights and saw the bug spray the ground about eight feet away. He ran to grab it, and heaved himself back into the car, soaked.

Now what? Remember how I said earlier that we hadn't bought any gas because it was Sunday, and we were feeling so self-sufficient? Well, now we knew that we were very low on gas. We obviously couldn't camp here; a motel room was in our immediate future, but could we get there? Could we find our way down the dark roads to the freeway? What would we do if we ran out of gas? We prayed and asked Heavenly Father to help us, and then Mark said the fateful words: "Why don't you drive? It's a little dark for me."

Now it's true that I do most of the night driving in our family, but there was a problem: I was sitting on the passenger side of the car, and in order to drive I would have to get outside in the sideways-blowing rain. No matter, I was hot and sweaty anyway. Mark climbed over the console while I sprinted around to the driver's side. Nope, I wasn't hot and sweaty anymore. I was definitely cooled off. We were on our way.

It was kind of like driving through the inside of a carwash. A carwash with strobe lights that go off continually. A carwash with the wind tunnel at the end going full blast during the wash cycle. A carwash with hail beating on the roof. You know, that kind of carwash.

The wipers were going full speed, and I could still barely see the road. I crept along at 15 mph, one yellow stripe at a time. The strobe-light-effect of the lightening made the wipers seem frozen at one spot on the windshield. Flashes of lightening revealed mountainous orange clouds piled up to the west. We drove along a two-lane road between cornfields, a road with almost no shoulders. Am I being overly dramatic? It was a dramatic moment...actually lots of moments. I wasn't worried about being hit by lightening, but I was a little nervous about going off the road and down into a cornfield.

"Can you see?" Mark asked me. "Are you sure this is the road?" (Cue sound effects: Flash-bang-crash!) "Did we miss the turn? Oh, dear, look--the little yellow 'GAS' light just came on." (Flash-bang-crash-flash-bang!!)
"Please be quiet, Mark," I said through gritted teeth.

But what was the worst that could happen? We could run out of gas and spend the night parked by the side of the road in the car. That would be uncomfortable but not the end of the world. It seemed forever before we were back to Highway 10, when we finally saw a couple of other cars on the road. Two bridges over the Platte River, and then to I-80...now it was only 3 more miles back to Kearny, and gas stations, and motels. The rain was letting up a little; I turned the wipers down to "medium" instead of "full-on attack." Exit 272 came into view, and we pulled into the first motel from the offramp.

Even after we were checked into our comfortable room, it took a while for us to calm down. We thought a soak in the hot tub would be just the thing, but the lady at the front desk informed us (that would be us in our swim suits, with towels over our arms) that they always lock the pool during a lightening storm. Oops...we had revealed our ignorance of Midwest weather again. Now we have a new understanding of the words "severe thunder storm," and I can't help but wonder how it must have felt to the thousands of pioneers on the Oregon, California, and Mormon trails as they made their way across Nebraska with only minimal shelter.

Today we're driving nine hours to Davenport, Iowa. We have planned to camp next to the Mississippi River, but we'll see. The forecast for that area is "thunderstorms," so we may be "camped" in a motel again tonight. 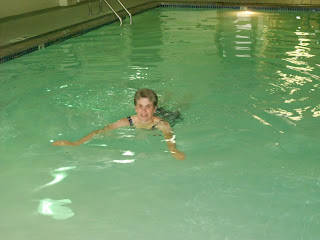 Ahhh...feeling a little more relaxed after a morning swim... 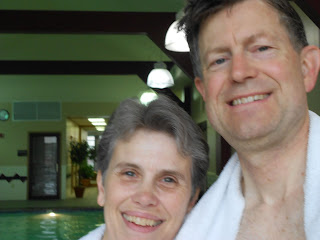 Oh my! We can definitely relate to those experiences and feelings about the Midwest thunderstorms!!! Glad your story ended well. Our night in SD was breezy and warm and we could see distant lightening, but nothing dramatic, thank goodness. Isn't it fun?!

Oh wow! That thunderstorm sounds EXACTLY like the kind we had here today. We were even talking about how much it felt like we were inside a car wash. At least it was light out and we were only a few miles away from home! Glad you guys made it through okay!

Yeah, I think I've driven through that carwash a couple times this year.

Great post Mom! I could really visualize the whole thing and it was quite riveting! Glad you guys made it through that night safe and sound.