Day 9: The importance of place

Yesterday we enjoyed some more sweet experiences with Katie and her family. 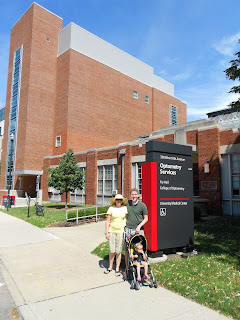 First we spent a couple of enjoyable hours walking around the Ohio State University campus, where Bryan will begin studying optometry in September. It's a huge school--50,000+ students! Bryan is excited to begin his classes in two months. The campus is old and lovely, with buildings dating back to the late 1800s, large expanses of lawn, and newer buildings mixed throughout. 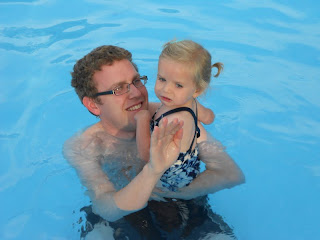 We relaxed all afternoon, then went for an evening swim at the local pool. The weather has been very pleasant during our visit--highs in the 80s and low 90s, with some humidity. It felt good to play in the water, and then we came home and played board games with Katie and Bryan until late into the evening

Oh, and there was one more little thing that happened yesterday. Serves me right for caring so much about places...

For me, one of the significant things about this trip is place. Not just to read about a place, or hear about it from someone else, or even see 360-degree panorama photos on the internet, but to actually be there, to soak in a location with all of my senses, to experience the morning birdsong and evening fireflies, the humidity or wind on my skin, the smell of morning air, the stones in the natural landscape, and the long views--the way cornfields stretch into the sky, or mountains jut up against the horizon.

Synthesizing all of my senses into specific locations is one of the ways I "read" the world. Three summers ago, when I hiked 50 miles solo through the Oregon woods, about half of the trails I hiked were new to me, and the other 25 or so were trails I had hiked at least once before.  Some of the trails were new adventures, new places to become acquainted with, but many were old friends, with familiar bends and landmarks greeting me along the way. One section of the PCT I had hiked only once before, twenty years earlier. I was surprised that even on that trail, I recognized certain places by the turn of the trail, the angle of a ridgeline above me, the set of stones in the tread.

The importance of place is one of the key themes in the Oregon Literature course I teach at Oregon City High School. Some stories could happen anywhere. Most stories are grounded, literally, in certain places. What happened here could not happen anywhere else in quite the same way. Setting becomes a character and, as readers, we experience another's life story through the lens of place.

What life stories will my children experience? So many of live far away from me now, and almost all of them have just recently changed their places. Josh from California to Utah, Katie from Utah to Ohio, Angela from California to Nevada, David and Kendra still in Kansas, but living in different homes and experiencing some job changes. We are a family in transition. I am eager to visit children and grandchildren on this visit, but I am equally eager to get the ground truth about their homes, their places, and the life stories they will live there.

Earlier in the trip, when we were back in Salt Lake, I had a little meltdown when it looked like our schedule wouldn't easily permit us to drive to Josh & Hillary's new home. Even though they weren't in town that weekend, my mama-heart needed to be there, to see the house, yes, but also to drive through the neighborhood, to walk to the little park down the street, to catch the slant of morning sun to smell the flowers growing alongside the house. When I explained all this to Mark, he willingly agreed to wake up extra-early one morning so we could go and see their new place.

And so, it has been sweet indeed to spend time with Katie and Bryan and Olivia in their lovely new home. Katie has settled her family into a home space that is airy and comfortable and filled with color. They are getting to know their new city. Their four years here, while Bryan is in optometry school, will surely fly by, until it is time for them to come to know new places, live more of their life stories, and my mama-heart will once again yearn to travel, to make sure that all is well in the new place for my children.

But sometimes places get complicated. Yesterday I suggested to Mark that he use his online family history skills to see if he could dredge up the address where my great-grandparents lived when they were here in Columbus in the early 1900s. My great-grandmother, Grandma Polly, was a lively, independent woman, the only great-grandparent I knew as a child. She had moved from Columbus around 1913 with her six children, one of them an invalid, to the healthier climate of California coastal air. Her husband stayed here in Columbus for another seven years. He worked as a postal clerk, and he was unable to secure a transfer to California for all that time. During that whole time, he came to California to visit his family only three times. It's an intriguing family story, and I thought I would like to have a photo or two of a place in Columbus to add to my family history files.

First Mark tried census records, where he found the family data, but no address. Then he went to marriage records, and before long he had my great-grandparents. 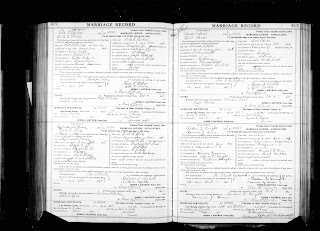 But the dates were wrong. It showed them getting married in 1917, when they were in their 40s, which was way too late. Then we noticed more inaccuracies: the marriage certificate showed that my great-grandfather was a widower. It said my great-grandmother was divorced!! And it listed her surname as Tarbox, which was her married name, my great-grandfather's last name, rather than Lydick, her actual maiden name.

"That's wrong," I told Mark. "Someone has made a mistake. They had six or seven children. They can't have started in their 40s. And she had gone to California by then." So he kept searching. And what he found was an earlier marriage license, from 1897, back when I knew they had been married. Whew! 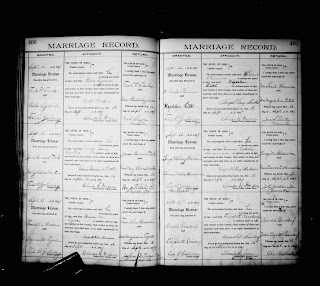 But wait a minute. My mind tried to wrap itself around the "other" marriage certificate Mark found online. This wasn't some genealogist's error in a family history document. This was an actual legal document from that time period. The 1917 certificate was the real deal. The right names, the right place, but the wrong details. Then the puzzle pieces began to fall into place. What if...what if my great-grandmother actually was a divorced woman when she married my great-grandfather? What if her surname really was "Tarbox" then, in her 40s, after their first marriage, after they had had all those children and she had gone off to live in California for seven years as a single parent, and oh my goodness!!

I know, I know. This is the danger of digging into family history--you never know what you will find. Skeletons live in every family's closets. Before this, it had always tickled me to learn of the exploits from the past. But I always expect those "adventurous" relatives to be ones from further back in the past, not from relatives I actually knew. Grandma Polly has been--still is--a huge influence in my life. Her mix of independence and grit and compassionate tolerance has been a touchstone for me since I was a little child. When I chose to convert to the Mormon religion at 18, I felt Grandma Polly's approbation for making my own decisions about my path to God. When I went back to college in my mid 30s, I drew on Grandma Polly's courage to get me through. And, ironically, when I divorced my first husband, I often thought of Grandma Polly encouraging me to hang in there.

When Mark and I have time for a little more family history research, we'll do some digging to see if we can actually find a divorce record for them in those intervening years. What about great-grandfather being a "widower"? Did he remarry, and did his second wife die, before he remarried his first wife? This place in Ohio holds more than the "today" stories of Katie and her family; it holds the "yesterday" stories of great-grandparents who were more complicated--and more real--than I had expected. 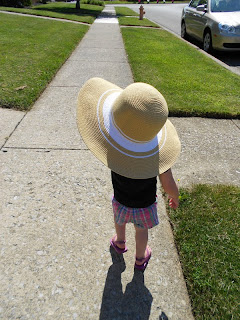 This morning we'll take family photos with Katie, Bryan, and Olivia, and then we'll climb in the car and head to New Jersey to visit Michael and Maddy and Grandma Jane. But before we leave Columbus, we'll take one little detour...to an address that showed up on that second marriage certificate...where I will be anxious to experience a place where other stories happened long ago.
Posted by Kathy Haynie at 5:21 AM

Very interesting! I sure didn't expect that little twist in the story. You'll have to let us all know if this little mystery gets solved.

I'm pretty excited to hear the rest of the story if you can find it. I'm glad you're having fun in all the great places! Drive safe