Day 17: Reflections on the Midwest

I'll just admit right up front that I am a snob about the West. About living here.

I feel very fortunate that I was raised on the west coast. That is, I feel fortunate that I wasn't raised somewhere else...like the Midwest, or example, or in the East. The Western vistas are grander, the freeways are actually free, the people are more polite (except for Utah drivers...don't get me started...), the speech sounds normal, blah, blah, blah.

You get the idea.

Sheesh--as I write this, I realize what a North America snob I am, too. Of course it doesn't even occur to me that I might have been raised on another continent. But I'll save that topic for another day. Because what I want to say today is this: the Midwest isn't so bad after all.

There, I've said it. Yes, it was hot and humid. No, there aren't any mountains. But the humidity wasn't unbearable, and the land isn't totally flat. There are rolling hills and streams and everything is so green! Green cornfield. Green soybean fields. Green trees along all the streams and rivers, and as we drove further east, toward Ohio and into Pennsylvania (I know that's not "Midwest" anymore) there were green trees everywhere! As in, you couldn't see the towns for all the trees.

Now, I am no expert. We drove through on the interstates, we stayed with family for a few days, and we moved on. But while we were there, I could see--at least a little--why people might love to live somewhere else besides the West. I didn't pity the people (at least not too much) who lived in Illinois or Iowa or Ohio or Kansas. Or Indiana, which, at least based on what I saw from the interstate, is one of the prettiest Midwest states.

If our time in the Midwest started out like a lion, with the severe thunderstorm in Kearny, Nebraska, it went out like a lamb, with a charming rest stop in Goodland, Kansas, almost the last town before crossing the border into Colorado.

I wanted to stop. Mark wanted to keep going. "Convince me," he said, so I did.
The map said there was a "museum of the high plains." He thought it would be boring. I said it would be a good place to get out of the car and stretch. It might be interesting. If we didn't like it we could leave. We needed gas anyway.

Ha! I convinced him.

We gassed up at the interchange and got directions to the little museum. The lady told us to drive past "the Van Gogh." Huh? 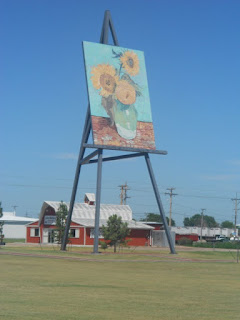 Oh, I get it. This is Kansas, the "sunflower state." So they have a giant replica of the Van Gogh painting. 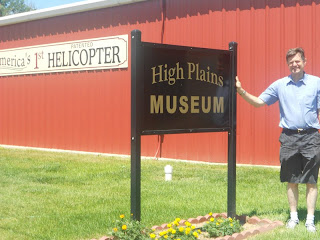 Not only did the museum have great displays of the history of western Kansas, but they also had the actual first (patented) helicopter in the US! Mark was one happy boy. 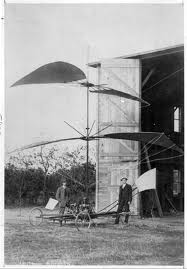 So cool - the museum had a button to push, and the rotors whirled! Haha - it didn't take off.

As we were leaving the museum, we picked up a coupon at the counter for The Buffalo Guys. We drove 1/2 mile to their little shop, and we got free buffalo jerky (yum!) with the coupon. Check out the link for wonderful, healthy meat that they will actually ship to you!

Thank you, Goodland, Kansas, for a wonderful sendoff from the Midwest! I am looking forward to my next visit...maybe when it's not so hot...
Posted by Kathy Haynie at 10:09 PM

I'm glad you got to see the other parts of North America. I have traveled all over the US, east, south, north, and west. I can't pick one place that I truly disliked but I can tell you about a million places I would like to visit again. Home is where I hang my hat I tell people. BTW - People from different parts of the US do have different accents. It maybe hard to hear them, but they do.

Don't forget, those "other" states have gnats and we don't! (Boy, I don't miss those!) Actually, though, we found midwesterners and especially Michiganites to be be very friendly people. Thumbs up for them!