I forgot to mention one of the coolest things from yesterday morning: the fish in the Snake River!

But when we went outside of our darling cabin in the morning, we saw...

It was amazing. We had heard the splashing in the night when we got up for a midnight trek to the restroom. We thought it was ducks - too dark to tell. But in the morning, we realized that it was fish in the shallows of the river. BIG fish. We hoped they were salmon, but that's not likely. Mark thinks they were maybe catfish. The woman at the interpretive center said that this part of the river has mostly "trash fish." Whatever they were, it was so cool to have them right there in the river where we were staying. They were in groups of 3 or 4 fish, about 20 feet from the shore, with a group about every 30 feet all along the river as far as we could see. It was as if they had all agreed to meet and have a little fishy orgy all on the same morning. How did they know?

If you watch the whole video, you can see the beautiful pelicans flying by. And LOTS of fish. Listen carefully and not only will you hear the fish splashing, but you will hear the little birds calling in the background. Enjoy! 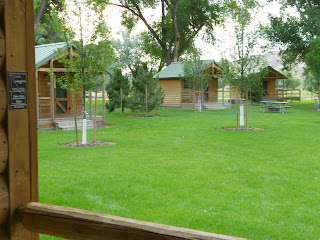