Here is a video of today's tsunami surge at the small harbor on the central California coast where I lived as a teenager.


The first part of the video is aimed south, toward Pismo, with Avila Beach off to the left. (It's time-lapse photography, so everything looks like it's moving a lot faster than it really is.) Nothing too dramatic to look at here, but it's interesting to think that the surge traveled more than 5,000 miles from Japan. You can tell the surge is coming in when the big rock in the foreground is covered with water.

You can click here to read more about the setting of the video.

The second part of the video is aimed north, toward Port San Luis, where my father was harbor manager from 1968 until about 1980. You can see all the boats moored in the Port San Luis anchorage in the video, and when they all swing around to another direction, that's when the surge is coming through.

My family lived right at the harbor, with only a parking lot between us and the ocean. I think if we still lived there now, our home would have been safe, but I am certain we would have been evacuated today. 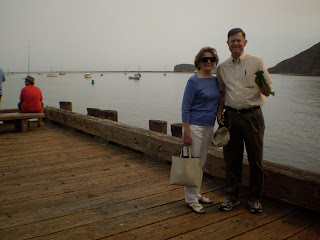 Mark and his mom on the Port San Luis pier, Summer 2008
You can see the boats anchored in the background.
You can also see the island by the breakwater that shows in the tsunami surge video.
I have two tsunami memories from my childhood on the California coast.

I remember being evacuated late at night in 1964, when I was ten years old, the night a tsunami raced south from the Alaska earthquake. We lived in Morro Bay then, and Dad was the harbor engineer there. He was already down at the harbor, so it was up to Mom to get my brother and me away from our home, adjacent to a low-lying beach, after the firemen came through our neighborhood, knocking on doors. Dad had the car, and Mom was not at all happy about having to drive us kids in the jeep, especially when the engine flooded!

I had nightmares after that, about being out on the beach with my brother, and the water would get sucked out by the surge, and my brother would follow it, and there was nothing I could do to save him.

I also have vague memories of being on the family sailboat, tied up at the dock in Morro Bay, when it suddenly tilted with a tsunami surge following the Chilean earthquake in 1960 and I had just turned six. Dad yelled at Mom to get my brother and me to safety, and he took the sailboat out into the middle of the harbor, where he anchored it over a deep hole in the harbor, while the surges ran in and out for hours. 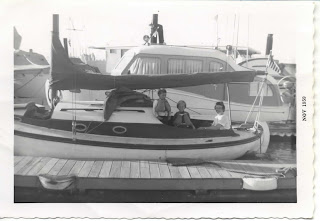 My brother, me, my mother on board The Echo
6 months before the tsunami from Chile
Of course, those are just tiny blips on the scale of human experience with tsunamis. What happened yesterday in Japan, and in 2004 in Indonesia, are horrific beyond anything I can imagine. The pictures look like something from Hollywood, but they're real. I guess what I'm trying to say is that, if my wimpy little tsunami memories can leave me with my stomach tied up all day, thinking about the horrible suffering of so many people in Japan, how much worse it is for the people who are actually there, unable to counteract nature's raw power.

I can say that I feel powerless to do anything to help, but then that becomes absurd when I think about the actual fact of powerlessness the people are in the stricken communities. I'm sitting here in my home, safe and warm, typing on my computer. At lunch today, I sat in the teacher office with colleagues and we talked in amazement about the tsunami, while we munched on Girl Scout cookies, and I thought to myself in that moment, someday there will be a disaster here, and it will be awful, and meanwhile, on the other side of the world, someone will wonder what it's like for us, while they go about their normal, daily lives. How can it be so "normal" here when it's so awful there?

In my last post, where I listed a bunch of nonfiction books, one of them was Hiroshima by John Hersey. He visited Japan just weeks after the U.S. dropped the atomic bomb on Hiroshima, and he documented what life was like when the sky broke open. I've been thinking all day about the images he creates with his words. I imagine that the actual, horrific, lived experiences of the last 24 hours for the people in northeast Japan have many similarities to what was experienced in Hiroshima.

I like to think I am in control of my life. I like to imagine that I can pray in the morning, and have some idea of what the day will hold. I like to think that I know what to expect, and I usually do, or I think I do, until a tsunami comes.
Posted by Kathy Haynie at 8:22 PM

I watched a long video clip of the tsunami as it hit a little town in Japan. It was filmed from a helicopter and the camera followed the surge of water inland. I was horrified to see cars and people below, driving and running from the water, with some being caught in it. I, too, was struck by the realization that this was NOT a hollywood movie, but real people with real lives that were affected, and it felt almost wrong to have been able to witness it from the comfort of my own living room. Powerless is a good word for it. Helplessly powerless. These were REAL people. Real heartache.

I share your feeling of disbelief that things can be so "normal" while other people's lives are being ripped apart. I think that happens even here in our own neighborhoods, when people have personal disasters of the heart, or other life changing events behind closed doors, and we never know it.

My prayers this morning were for all those affected by the natural disaster, and for all those struggling wherever they may be. One of my goals for this year is to be more in tune with the Spirit and aware of the quiet tragedies around me, that I may be able to impact in some positive way.

Thanks for sharing your thoughts, Mom. I agree. It is pretty unbelievable.

I watched the news this weekend and saw that Santa Cruz was also hit by the tsunami. It's hard to believe that something over 5000 miles away can affect us here.

I often wonder what causes these things to happen, could it be global warming? Maybe it's the natural course of any planet. Maybe its the fact that we use Day Light Savings Time still. Who knows.

I know three things are very, very true. Death, taxes, and we have no control over anything.