The Writer's Double Self 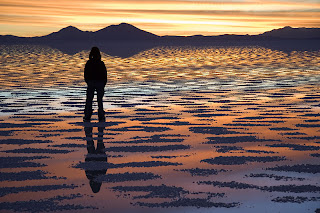 I finished reading Walden (on schedule!) and was (mostly) prepared for class discussion last night. Among many things, we discussed Thoreau's awareness of himself as a writer in the book. On the first page, for example, he explains that he will be using the first-person "I" in the book, rather than the (sort of) anonymous first person. Later in the book, in the chapter called "Solitude," he talks about a deeper awareness of a separate self, a detachment in his life as he "watches" himself with a writer's eye. He says,

"I am sensible of a certain doubleness by which I can stand as remote from myself as from another. However intense my experience, I am conscious of the presence and criticism of a part of me, which, as it were, is not a part of me, but spectator, sharing no experience, but taking note of it; and that is no more I than it is you."

Most of the students in the class are in the same writing program that I am in, but there are a couple of non-writers in the class, and one of the non-writers asked if all writers feel that way. The question was tossed around a bit among the writer-types, and then the discussion moved on to other things.

But I sat there remembering myself as a 4-year-old on the beach in Morro Bay. I can picture this so vividly. I was there with my brother, my mother, and one of her friends. We were on the small beach near the intake vents for the PG&E power plant. I was walking along the beach, looking at small stones and shells, talking to myself, and what I was saying was a third-person narration of my actions. "She looked at that rock, and then she walked over closer to the water, and then..." Or something like that. I have a conscious memory of many such narrations that I spoke--aloud or in my head--as I went through childhood. My mother overheard me and asked what I was saying, and I had no idea how to explain it to her--I just knew that it was something I liked to do. But I couldn't articulate that at 4, so I just shrugged my shoulders and kept walking along by myself, talking inside my head.

I don't know if all writers have that sense of double self, but I know that I do, at least some of the time.
Posted by Kathy Haynie at 7:58 PM

Did you write stories when you were a little girl? Sounds like there was always someone inside you that wanted to share experiences with the world. I'm glad you do!

I have always done that too. Maybe I learned that from you, or maybe it is just something that "writers" were born with.

I don't do it in the third person (perhaps that's why I'm terrible at writing fiction), but I write things in my head all the time. I have always done that.

For me, not so much the double self, but an alternate self. I can place the character in different situations, but I see what the character is seeing, even if it is multiple characters. I rarely see the faces of my characters, but rather their build, how they dress, etc.

Much like a dream I suppose, I never really thought about it before now. When the characters come to mind, they are always so vivid, sometimes I think feel that they could be real people. Go figure.