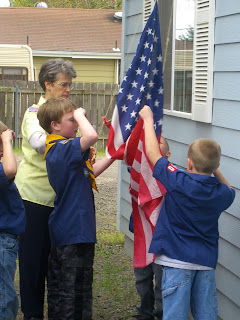 Cub Scouts practicing an outdoor flag ceremony, Spring 2008
Yesterday we had the annual Veterans Day assembly at our high school. It always impresses me when 2,000+ teenagers sit respectfully for an hour. Over 100 veterans from our community were in attendance, and the kids were great about honoring them.

The choir sang a beautiful arrangement of the national anthem, the band played marching music when the vets entered the gym, a bagpipe guy played "Amazing Grace," the JROTC kids demonstrated the thing where they twirl and slap the rifles, and the local Patriot Guard Riders revved their motorcycles whenever the kids gave a standing ovation.

At one point, a slide show was projected on the wall, showing U.S. military images with patriotic music playing in the background. Some of the images were the kind that make my stomach lurch: war machines like bombers and destroyers, huge and deadly. Other images were tender: soldiers in combat gear, surrounded by children in foreign lands. Without a doubt, the men and women in the U.S. military are ordinary people doing an extraordinary job.

It rankles me when I hear people say that our troops in Iraq are "keeping us free." It always seems to me that the campaigns in the Middle East have as much to do with maintaining our way of life--access to stable oil--as they do with "freedom." And I worry that operations like the current one in Afghanistan have the potential to do more ultimate harm than good, if the people there are left feeling that the U.S. troops are there to dominate and control, instead of to help and serve.

I don't know enough to know for sure if I'm right, but at the same time, I can't be sure that I'm wrong.

And I do understand that there are a number of foreign operations continually underway that work to eliminate threats from terrorism and other forces that truly do threaten our freedom.

Our service men and women and their families are signed up for duty that is undoubtedly necessary, even if I sometimes disagree with programs or policies. They have chosen a career that is challenging and often difficult, and I gratefully respect their hard work and sacrifice. When I was a Cub Scout leader, I taught my boys to respect flag and country, and to always be willing to serve. Was I preparing them to enter into military service when they become adults? Do I wish that for them? Do I not wish that for them. I don't know.

Several of the men and women I admire most are military veterans, or currently serving.

My dad was drafted into the Army during the Korean War, in 1953. I was born in a military hospital in the U.S. in 1954; Dad was good enough at training new recruits that he was retained stateside, and did not have to see combat in Korea. He left the Army when his tour ended in 1956.

My brother served in the Coast Guard from the time he turned 18 in 1973, until he retired from his Coast Guard career in 1998. During that time his family lived in Alaska, California, and in several locations on the East Coast. His wife and four children followed him without complaint from one home to another; he was often out at sea for weeks at a time during his career.

My niece Becky serves in the Air Force, currently stationed in Italy with her husband. She administers security for the base where she is assigned.

My son-in-law Mike enlisted in the Air Force as a diesel mechanic in 1983. During his time in the military he was trained on computers---when they were still new--which became his career choice after his discharge.

My daughter's brother-in-law Chris enlisted in the Army just a few weeks ago. He is almost finished with basic training, and will then embark on officer training. His wife and two young daughters miss their dad and husband while he is in training; they have already been uprooted once, and will no doubt be uprooted multiple times in the future as Chris pursues his new career.

My friend from church, Leo, served in World War II. In his 80s, Leo is a dear and a gentle flirt.  He tells amazing stories of being a young infantryman during the Battle of the Bulge, surviving a freezing winter out in the elements and trusting to luck and God. Now his battle is with leukemia, and I don't know how much longer he'll greet me on Sundays with a kiss on my cheek and a wink at my husband.

Happy Veterans Day to these wonderful vets, and to all the others who have served in the past, and who continue to serve today. I love you and appreciate you. I hope my life of service in my community and profession is worthy of your service to our country.
Posted by Kathy Haynie at 5:05 PM

Having served our country in the Air Force and in supporting our troops, I understand how you feel about war, etc.

Later in my career in the Air Force, I worked in the "war room" from time to time. It was a sobering thought that I could be watching millions of people die with one order.

Most wars are political or economical. This is one of the reasons why you enter the US service that you swear an oath that will follow the orders of the commander and chief. No matter what party he/she belongs to, no matter what the objective might be. You just follow the orders. Without that discipline, nothing can be gained. If our troops do not keep that discipline, everything could be lost.

I believe in the US Constitution. The right to bear arms, the freedom of speech and press and the freedom of religion, etc. I would again, give my life to protect my family and my country from anyone who threatens that way of life. Our society is not perfect I would agree, as our justice system is not but I do believe its the best that we have for now.