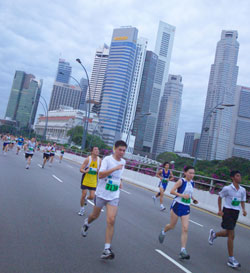 Last weekend all the stakes in Oregon had Stake Conference. The Sunday sessions were broadcast to us from Salt Lake City.

One of the Sunday speakers was Elaine Dalton, the General Young Women President. She told an inspiring story about a faithful member from Singapore and the Singapore marathon.

The story began with Sister Dalton telling that she had mentioned training for a marathon in a talk she gave. Her intent in mentioning this was to inspire people to prepare themselves for challenges in the gospel, but she had an unintended result, too: many people emailed her to learn more about her training schedule, so they, too, could train to run a marathon.

One man emailed her from Singapore. He explained that he would very much like to run a marathon, but the only one in his country would be held on a Sunday. He was a poor man, without the means to travel to another place with a marathon on a Saturday. Would it be all right, he asked her, if he were to run the Singapore Marathon on a Sunday, just that one time, so he could accomplish his great goal?

She replied to his email, saying that she could not make such a decision for him, suggesting that he study it out in the scriptures and go to the Lord in prayer. She never heard anything back from him to indicate what his decision had been.

Some time later, as part of her church assignment, she traveled to Singapore. To her joy, one of the church members that met her was the man who had emailed her about the Singapore Marathon. When she had a quiet moment, she asked him what he had decided about running the marathon. Did he do it?

"Oh, yes," he said. Although her heart sank within her, she congratulated him on his accomplishment. Then he continued, "But I did not do very well. You see, I ran it all alone on a Saturday, and there was so much traffic."

I am grateful for this good brother's example to keep the Sabbath holy, and to focus on the Lord on Sundays. I know that when we do so, we will be blessed in ways we do not even anticipate or expect.
Posted by Kathy Haynie at 6:24 PM

In January of last year Chris made several goals to complete before he entered the Army. One of them was to run a marathon. He and a buddy did their own half marathon and he loved it. However, all the local full marathons were on Sunday so he decided to run his own. He did this on a Saturday morning in August just before they left Nebraska. He started at 4 a.m. to beat the heat and went 13.1 miles out and then to finish he came back home. He said it was so dark when he started he could hardly see the path, but he finished and ran most of the way, with just a little walking towards the end.

Keeping the sabbath holy has been very hard for me since moving to the east coast. I actually did pretty well yesterday, but I have room for improvement.

I find that my time is cut very short between taking care of Maddy, the house, work and all the other chores that arise week after week. Sometimes its so easy to do "a little extra" after church, or some times before church.

It has been a challenge, but I continuously work on it.