A Scout is Friendly

Many years ago I was the assistant scoutmaster over the 11-year-old patrol that was part of my church's scout troop. I herded 11-year-olds for five years. They were some of the best five years of my life.

Every week I helped the boys memorize the Scout Law: 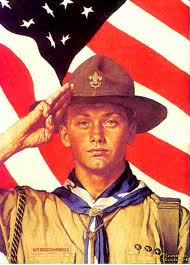 
During my scouting era, I enrolled in college, in the fall of 1990. I had been a full-time mom for 15 years, and I felt intimidated about my abilities to be a college student. Here's a little excerpt from the thesis writing project I started last summer, about how the Scout Law helped me when I started back to college:

"The only class I remember taking that term was an Introduction to Literature course. Mike Keppler was the teacher, but I hadn’t yet become comfortable with the college-level practice of calling professors by their first name; I called him “Mr. Keppler” all term. I was shocked by some of the stories; I had never been exposed to realistic fiction before, nor to women’s studies, nor to African American literature.

I was nervous in that class for the first four or five weeks, constantly anxious to know if I had completed the homework correctly, had understood the story properly. The younger students, accustomed to the routine of school, seemed so much more competent than I felt. I was shy to sit near other students, shy to make eye contact in the class, shy to raise my hand and answer questions.
It is interesting to me now, to look back and remember how intimidated I felt when I entered the classroom. I had earned nearly straight As in high school (one B in chemistry), and had earned top honors in the science department. My one year of college after high school had been spent studying Biochemistry at a university in California, where I had again earned top honors. Why did I feel so unprepared for course work 16 years later?
I could rattle off the Scout Law without even thinking about it. My 11-year-olds had to memorize it to advance in rank, and we practiced at every meeting. That fall, I walked across the campus at Clackamas Community College, forcing myself to smile at other people, muttering under my breath, “A scout is friendly, a scout is friendly, a scout is friendly…”
About half way through the term I began to relax. Not about the school work—I was always programmed to be a “good” student—but about my capacity to understand and do what was required. Once I relaxed, I began to have fun. I stopped staring only at the book in front of me during class, and looked around and took stock of my classmates. Based on their responses to Mr. Keppler’s questions on the readings, I figured out that they were no smarter than I, and in some cases, they were either really struggling or lazy. Critically reading the texts began to be as thrilling as the chemistry and math classes had been to me in high school, and wrestling with a thesis paper was a worthy task."
Posted by Kathy Haynie at 8:10 PM

Well, I'd say you've done pretty well for yourself. I wonder what all those other students who were in that class are doing now.

I don't know...the teachers I had then have all retired.