I know, I know, I've been saying for years that I wasn't interested in visiting Crater Lake.

Too boring, too blue, too pristine with nothing to do but drive around the rim. Y-a-w-n....

Hah! Was I ever wrong! Mark and I stopped and enjoyed this spectacular place last week on our way home from California.

Crater Lake is so much more than just another pretty photo on a calendar! There is lots to see that never shows up on those calendar photos. I would gladly go back for another (longer) visit. Here are some highlights from our time there last Monday evening and Tuesday morning. 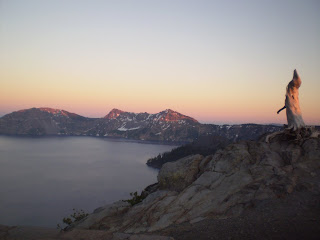 Crater Lake at sunset. We arrived about 8:00 Monday evening, and had to hurry to our campsite at nearby Diamond Lake (set up the tent in the dark). But we couldn't resist a quick photo shoot. Turns out that the mosquitoes couldn't resist us! They were horrible, swarming around our face the minute we stepped out of the car. We finally found this picturesque snag at a lookout with a good breeze, so we were (mostly) mosquito free, and managed to snap a few photos. 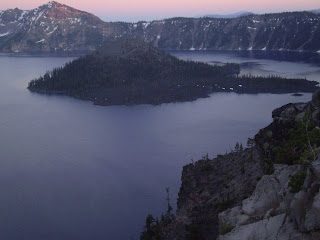 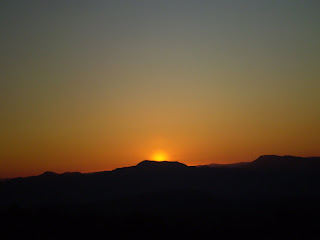 Sun setting behind the mountains to the west - time to head to our campsite! 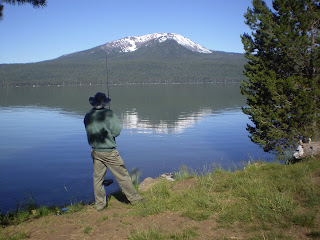 Mark pestering the fish on Tuesday morning at Diamond Lake. They weren't biting - they had plenty of healthy mosquitoes to dine on, and didn't need his power bait! Oh well...we packed up the tent and headed back to Crater Lake for a few more adventures. 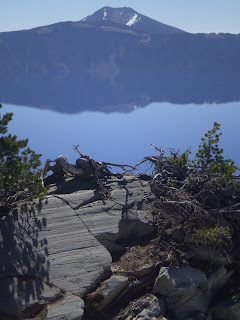 The lake was absolutely mirror calm, but the mosquitoes were sleeping in, so we enjoyed our Tuesday morning visit much more than the evening before. Everywhere we looked, spectacular geology cried out for our attention. What an amazing place! 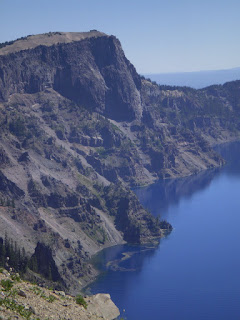 Llao Rock rivals Yosemite's Half Dome for a gigantic presence along the lake. 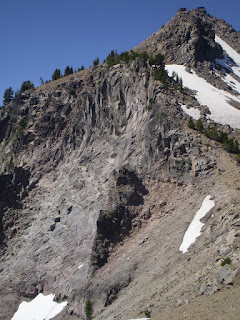 We decided to hike to the top of The Watchman. Can you see the fire tower clear up at the very top? We hiked all the way up there! 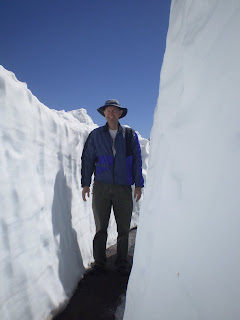 Part of the trail crossed snow fields. It felt like we were inside a refrigerator! 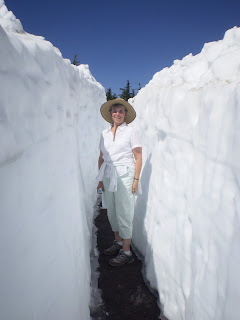 Pity the poor rangers who had to dig out the trail... 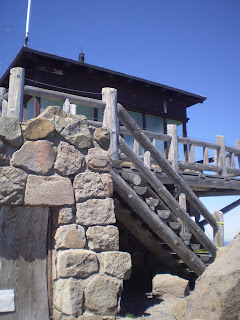 But the trail isn't just for the tourists. The tower is an active fire lookout during fire season. 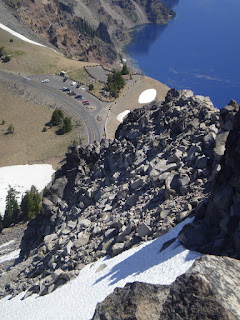 A long way down to the lake below! What a view!!
(You can barely make out our red Subaru in the parking lot.) 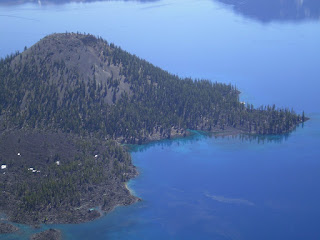 From the top, we could look down on Wizard Island and see the crater at the top of the "wizard's hat." 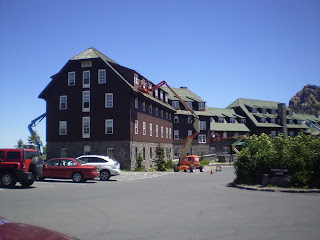 Back to Rim Village for a few more photos. Ongoing maintenance at the historic lodge - we counted 4 man-lifts with people wielding paintbrushes. 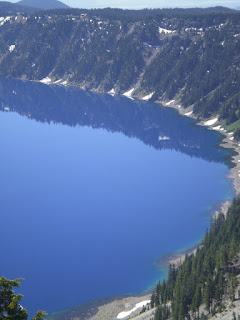 The photos capture the scenery, but not the scale. It was so much bigger and more awe-inspiring than I had imagined. The lake itself is 6 miles across! Everything is dwarfed by the volcano and the lake-filled caldera.
In addition to the vistas, we were impressed by the silence and calm of the place. Far below us, we could see two or three tour boats out on the lake (sooooo tiny!), but they were so far away that we could barely hear their distant motors. Mostly it was just the sound of the breeze in the trees and a few bird calls.
After our hike we went to Rim Village to buy a quick lunch, and then head for home. Good bye, Crater Lake! It was good to get acquainted with you. We'll be back!
Posted by Kathy Haynie at 10:02 AM

We've never hiked that trail upward before...might have to try it someday. I had no idea they clear a trail right through the snow...how "cool"!

That's really funny with the trail going right through the snow like that. It sounds lovely after all the heat we've been getting. Beautiful pictures!