Here are 3 things that did not happen yesterday and today.

Liberty and I had hoped this weekend would work out for our annual snowshoe outing in the neighborhood of Mount Hood. I watched the weather forecast all week, keeping my fingers crossed. We didn't put snow tires on the Subaru this winter, and I hate dealing with chains. By 7:30 pm last night the forecast for today was looking good. The mountain was full of fresh powder and the roads were clear. I was ready to have a day away from grading and Saturday chores.

But when I called Liberty at 8:00 pm to confirm our plans, we 'fessed up to each other. Both of us have too many things on our plates right now. Yes, we could go snowshoeing. And yes, we would have a wonderful time while we were out there, if we did. But even more than that, both of us knew that the pressure of so many other thing left undone would completely erase all the fun of a winter outing.

Balance in life. I know I'm not very good at it yet. I know I tend to overbook and overdo. Am I just slowing down because I'm approaching 60? I used to be able to keep my energy levels up and just charge on through. Stress? I laughed at stress. I was a can-do gal. Now I'm more of a wanna-do gal. I think I'm still accomplishing many good things, but not as much as I used to. 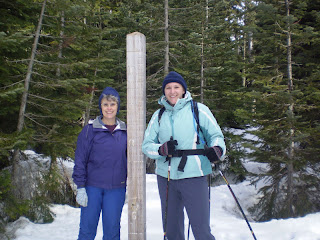 So Liberty and I rescheduled. We'll try again in a couple of weeks. In the meantime, here's a photo of one of our 2009 snowshoe outing. I hope I'll have some 2012 photos to post soon!

2. I didn't hear my thesis advisor tell me that I'm on track to finish in the spring

Speaking of not getting as much done...

I really have been diligently working on my thesis since December. In January my adviser and I took a realistic look at the way it was shaping up, and he suggested I narrow the focus from a 5-year period to a 6-month period. Whew! That really took a lot of pressure off. I knew I could go back later and write the longer book, but for the purposes of finishing up the thesis, this new plan seemed very do-able.

I set a schedule for myself, and mapped out a plan to have the bulk of the writing finished by the end of spring break. That would put me on schedule to meet with the thesis committee to defend the thesis during spring term. I could graduate with my MFA in June! After 5+ years of steady night classes and constant writing, I could put this project to bed!

Not yet, apparently. During yesterday's meeting, my adviser handed back a chapter--which I had hoped was in fairly good shape--with some (excellent) advice, which would mean major revisions, again. To chapter 4. Which means that--imagine a long line of dominoes--the changes I make to this chapter will trigger more and more changes to the chapters that follow. I could see where this was going.

"Um, I'm guessing that I won't be ready to defend this by spring term," I said.
"No, I don't think so," he replied. "I think we're looking at defending in the fall."

It's hard to admit that I'm not that good of a writer. Yet. You would think after taking 30+ credits of graduate-level writing courses, I would understand (and apply) the rules of narrative structure. Apparently not. Not yet.

I know, I know. It will be wonderful to have an extra six months to finish the project because I can write all summer, when the thesis committees don't meet. It's just (I don't mean to whine, but apparently I'm about to anyway) I'm tired of having to think about my thesis in the summer, when I want to play. This will make the third summer in a row where the little cloud of THESIS is casting shadows over camping, hiking, family time.

Hoo boy, time to call a wambulance. Stay tuned. I'm not giving up!


3. We didn't have a shooter at Oregon City High School

When I pray in the morning that our family will be kept safe during the day, I'm thinking about things like traffic accidents. Not shooters. I actually said that to Mark during the week, after our morning prayers. After he had prayed that we would be safe.

Yesterday morning, around 11:30 or so, an announcement came over the P.A. system at school. "Attention. We are in emergency lockdown immediately. Lock all classroom doors, turn off lights, and everyone stay away from windows and doors."

We do a lockdown drill at least once a year. All the kids, and the teachers, know what to do during the drill. The administrators always tell us ahead of time, so that no one panics. But this time it wasn't a drill.

You want to know how stupid I was? I didn't hear the announcement. I was meeting with another teacher in a small office that doesn't have a P.A. speaker. When I left her office, I was puzzled to see the fire doors closed at the end of the hallway. They close automatically during fire drills and such, but the fire alarm hadn't gone off. I entered the teacher office where I do my Literacy Coach work in the afternoons. I was going to call the office to tell them there was something wrong with the fire doors in the B200 hallways. I couldn't figure out why the office lights were off.

Thank goodness, another teacher in the office told me we were in lockdown. For the next 40 minutes, she and I sat in the darkened office, away from the windows and doors. I thought of Mark, in his classroom down the hallway, with his 35+ freshmen, wondering how everyone was doing.

Periodically one of the assistant principals would come on the P.A. to give us an update. There was a suspicious situation at the community college adjacent to our high school, and the police had advised the high school to go into lockdown. We were playing it very, very safe. There was never a shooter in the building. In fact, there was probably never a shooter anywhere in the vicinity. The police had a report of a man with a gun walking from the college toward the high school. They searched the wooded area between the two campuses and didn't find anything. After 40 minutes, the lockdown was lifted and life in the high school went back to normal.

Kind of. It's pretty creepy to have 2,200 kids be that quiet and still. Actually, it's pretty amazing. I don't know what bothers me most - the kids who had anxiety issues during the experience, or the kids who didn't seem to think it was a big deal.

On one hand, it wasn't a big deal. We aren't on the news. We aren't Chardon High School.

On the other hand, it makes me deeply, deeply sad to know that I live in a world where we have to train our children to be ready for someone shooting at them in their school. I'm so grateful that didn't happen. But it makes me sad that a school lockdown could ever be "normal."

Whew...thank goodness there was no shooter. That's kinda scary. Bummer about the snowshoeing and thesis progress though. :( Do you know when you're likely to have your thesis done?

I am so glad it was a false alarm. When I saw the news come on with a "breaking story" I almost changed the channel, until I realized it was Oregon City High School that was in lock down. I knew both of my parents were in the school, and I knew there were thousands of students that could be in danger.

I am grateful that there were no injuries, and probably no threat, but I haven't prayed so hard in a long time. I decided to start fasting, although it really only lasted an hour since the news reported everything was okay.

(Not sure why it got cut off.) While it turns out there wasn't really any danger, I knew that all I could do was ask my Heavenly Father to keep my parents and all of the students safe.

I am sorry you missed snow shoeing today, it was beautiful up here. Since we keep getting more snow I am sure there will be other chances.

Love you, and glad you had a safe and sane week, even if it means a little longer working on your thesis!

That is terrifying! I'm glad it was nothing after all.

I hope I get a sneak peek at your re-write...