I can't remember the last time I laughed so hard.

Let us just say that there were many hilarious moments of ignominious, sinking defeat.

HAHAHAHAHAHA!! Loved every minute of it.

I was able to snag a few photos... 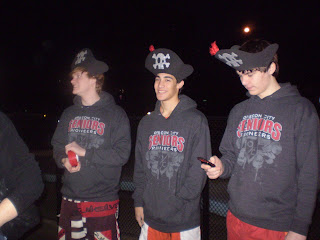 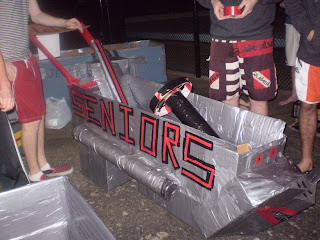 This craft's design was a bit unusual. We never could figure out what the extra structures on the bottom of the boat were supposed to accomplish. You can see that there is a box-like-thing sticking out of the bottom under the "S," and another one under the "O." Ummm...they weren't very helpful once the boat was launched. The steering wheel was a nice touch, though. 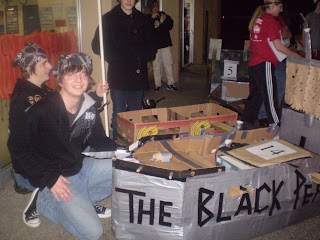 These fellows thought they had a winner with their "outrigger" design--the banana box on the far side of The Black Pearl. What they forgot to take into account was that the outrigger structure would prevent them from being able to paddle on the starboard side of the vessel. They didn't go far...too bad... 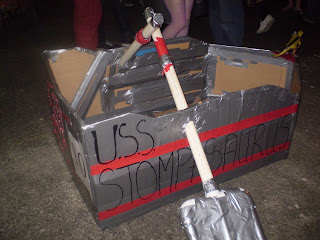 Classic cardboard boat design. These nautical engineers took it a step farther by incorporating oars instead of the customary paddle. Let us just say that the oarsman, once in the water, strove mightily, but unfortunately, he didn't understand how oars are designed to work, so he was paddling facing front. Again, a mighty effort that sank on the first round. 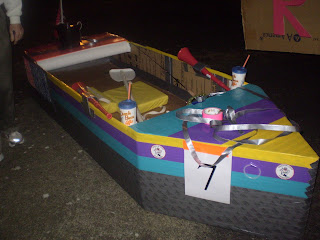 Now here's a snazzy craft. This one was designed by a couple of teachers, Becky Dyche and Karne Harper, who did quite well in the race. More about them in a bit. 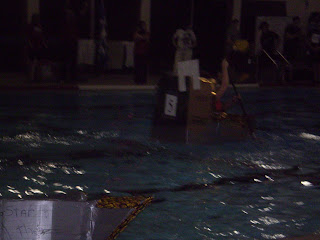 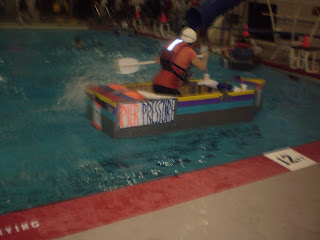 Here's that teacher boat again, Pier Pressure, with Karen Harper paddling. It ended up winning 2nd place overall! One of its chief advantages was that it stayed afloat through numerous rounds. This was a really sturdy design. The flimsier boats just didn't hold up, even if they were covered in duct tape... 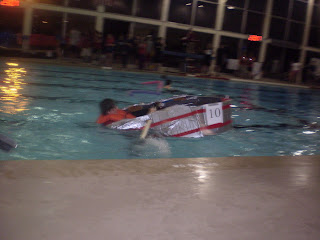 ...as you can see here. This little classic cardboard-duct-tape contraption is just about to go under. No matter how fast they were, if they couldn't stay afloat, that was a major problem, and once they started to bend, they would start shipping water, and that was the beginning of the end. 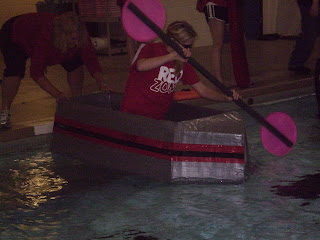 Another teacher craft, Pete's Pontoon. Here's Laura Jeffrey, being pushed off by the principal, Nancy Bush-Lange. This one was sturdy and stayed afloat, but some of the other boats were faster, so it was eliminated after a few rounds.

The prize-winning cardboard boat was the shape and actual size of a real canoe. That got Mark's and my attention...we know how to paddle canoes...maybe we'll sign up in a future year!
Posted by Kathy Haynie at 12:40 PM

Is this a regular competition that OCHS does now?

So was it all people from OCHS or did other high schools compete? What were the rules for constructing the watercraft?

Where's the picture of the cardboard canoe? What a fun event, and lucky you to be able to go and witness the triumphs and the tragedies!

This was only OCHS--16 student teams and 2 staff teams. I didn't get a photo of the cardboard canoe because it was on the other side of the pool and my camera is getting old...photo was too dark...

I think the teams were only supposed to use cardboard and duct tape, but some teams had a few other materials, and no one was disqualified. Maybe they'll be more strict in the future, but I think they just wanted to have lots of participation last night for the first time.

I hope it becomes a regular competition - it was a fun event.

I can't stop laughing. This is the best contest ever and I hope Sam and Audrey can invent a craft for this competition some day. You have visiting students at OCHS for a term, maybe?

That would be such a fun activity!