Mopping the floor with a diaper...

...and other interesting updates from the week. 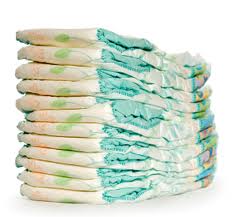 Today Mark and I helped David and Holly move out of their apartment. They have given away or sold most of their furniture. Today they took the boxes of belongings to the trucking company, and then loaded their van for the drive to Kansas and their new job/life there.

We vacuumed the carpets, and then it was time for one last mop of the not-too-big kitchen floor and dining area.

Oops! No mop. No rags. No paper towels. Everything was packed. What to do?

I pulled out a (new) disposable diaper from Holly's diaper bag and began swabbing the decks. It sort of worked. Modern disposable diapers are made to be very absorbent, so it quickly became full of the soapy water. But it didn't wring out well, at all; it just hung on to the moisture. And the diapers are made to stay dry on the surface, so that baby's bum is comfy, so it was hard to get much moisture on the floor.

But it did work, after a fashion. Between the diaper and some Lysol wipes, I "mopped" (diapered?) the floor of the kitchen area. Before I tackled the larger dining area, a sweet woman from housekeeping had wandered by and offered to loan David one of her mops. I have to say, the actual mop did work better than the diaper. But if you're ever in a pinch for a mop, it is possible to make a diaper do the job.

Another interesting tidbit from the week: my left big toenail fell off last night. It's been on it's way out (off?) for a couple of months. First, I noticed that when I changed my bright pink toenail polish every couple of weeks, that toenail had a large dark area. Ominous. Didn't want to think about it, so I quickly covered it up each time with more of the bright pink toenail polish.

Then, a couple of weeks ago, I noticed one morning that the toenail was distinctly "flappy." As in, it was still attached on one side, but not the other, and not along the toenail bed. It didn't hurt, so I've just been keeping it trimmed and covered with a bandaid so it wouldn't get caught on a sock and pull itself off prematurely. To tell you the truth, I was feeling a little squeamish and nervous about the whole thing.

Yesterday afternoon I went to trim it again, and it just lifted all the way off. There is a new toenail growing about 1/3 of the way up the toenail bed already. It doesn't hurt, and it doesn't look gross. It's nice not having to worry that it's going to get accidentally ripped off. I have no idea what I did to injure the toenail in the first place. Maybe hiking, maybe stubbing my toe one night in the dark...I don't know, but it's a good feeling to have the old one gone.

One more update from last week - something very satisfying to me - I'm taking a PSU writing class again this term, one which focuses on writing the thesis. I had that 200 pages of rough draft I wrote over the summer, so on Thursday night, when I had the quiet house all to myself for several hours, I pulled out the rough drafts and rewrote Chapter 1. Very Satisfying. I will take it into my writing class on Tuesday, and we'll critique it the following week.
Posted by Kathy Haynie at 6:20 PM

This post totally cracked me up. You rock, Ms. Kathy.

You and Rebecca must be kindred spirts. She lost a toenail yesterday or today somewhere. She hurt it months ago by dropping a can on it.

Ken could sympathise with you about toenails. :) Congratulations on your running progress...you're doing great!

This just made my day =)