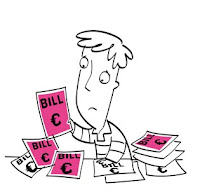 Last night I paid the bills.

Such an ordinary statement, but there are so many families who can't say that. It is too easy to take a job and a paycheck for granted, to complain about the bills, about getting up in the morning, about interest rates or coworkers.

My children can tell you that shopping is not a favorite activity of mine. I generally regard grocery shopping as a chore. But some years ago I had a friend whose husband was unemployed. They received food assistance from the church, for which they were grateful, but she shared with me that she longed to go grocery shopping, and choose the specific foods for her family. Ever since then, while I haven't been thrilled about going for groceries, I have at least been more aware of the privileged position I hold when I walk into the store with the ability to make a purchase.

This comes up in a book I've been reading about the author's adventures in Uzbekistan, called Chasing the Sea. At one point he realizes the gulf between him and his translator, simply because he (the author) comes from a stable economy. It is so easy to forget that what seems normal and ordinary to us in the U.S. would be miraculous in many other places.

For many of the people of the world, including a bunch of folks here in the US, even the families of some of my students, this post would be major, wonderful news.

Did you hear? I sat at the kitchen table last night and paid the bills.
Posted by Kathy Haynie at 6:01 AM

Amen. And I went for a walk in the frigid cold this morning because I WANTED TO. How many people are out in this cold and DON'T want to be? I am so grateful to have the choice.

Kathy, I think about this kind of thing all the time. Anytime I start to feel frustrated with my kids, I think of our friends who lost their baby last year--they'd give anything to have a fussy, whiny child still in the world. There is definitely a place for feeling frustrated . . . but it's also to remember all the gifts we have for which we ought to be thankful.