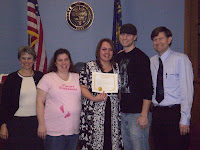 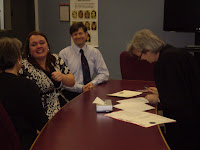 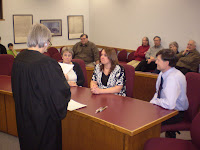 Yesterday Mark and I officially added a ninth child - a daughter - to our family.  She is 23 years old, and her name is Maleena.  She was in my class a couple of times when she was in high school, and I always admired her spunk and spirit, because she had a difficult life.  She reported her family for substance abuse and dealing drugs when she was in high school, and went into foster care.
After high school she aged out of foster care, so she was working and living with a roommate...Holly Hamblin, who eventually married my son, David, and became Holly Mayer...and while she was living with Holly, she took the missionary discussions and joined the church.  During this time she wanted to make good choices, but without the influence of parents she didn't always do so well.  It was a tough time in a lot of ways.
When Holly and David got married, we invited Maleena to live with us, and she has lived with us for most of the past 2 1/2 years.  Last summer, when she had moved out for a while, she hit bottom, and asked to come back.  We told her that she knew our expectations, and that she could move back if she was willing to agree to them.  She was, and she has been making consistent growth since that time.  She attended counseling regularly for six months, and she is still attending 12-step every week.
Near the end of 2008, Mark and I asked her if she would like to be adopted officially into our family.  At the time, we said that an adoption would formalize the relationship that already existed between us and her, but as we have gone through the process of preparing for yesterday's official court proceeding, we found that our relationship deepened more than we had anticipated.  We are very proud of Maleena, and happy to welcome her as our daughter.
Her name was Maleena Lee Tyler, but she wanted to have Haynie as her last name, and she also chose a new middle name for herself, so now her name is Maleena Marie Haynie.  She is registered to become a full-time student at Clackamas Community College this month, and she works 30 hours a week at Papa Murphy's pizza, as the early-morning (prep) crew leader.
So, welcome baby girl!  Hooray for Maleena Marie Haynie.
Posted by Kathy Haynie at 7:24 PM

thanks for the biting advice!

Congratulations! We're sooooo happy for all of you...and us!