Mark and I had our October play day this weekend. Lucky us--we had Friday off, and the weather forecast was good, so we decided to make it an overnighter. We both wanted to try out our new camping gear we bought at the REI garage sale last month, and Mark wanted to do a little fishing, so we decided to camp at Olallie Lake. We had new sleeping bags rated to 20 degrees, and our choice of two new tents to sleep in. Yesterday we loaded up the car and headed to the lake! 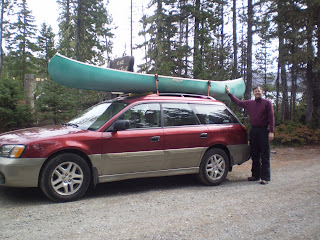 We were glad we did it the simple way, with the smaller canoe on top of the Subaru (instead of the larger canoe on the trailer) because the roads were pretty bumpy as we got close to Olallie Lake. 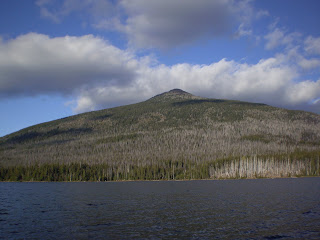 Although we camped at other lakes near Olallie Lake last summer when we went backpacking with Joshua, it's been years since I'd camped here. I remembered how windy it always is, though, so we made it a priority to choose a campsite with some shelter from the wind. 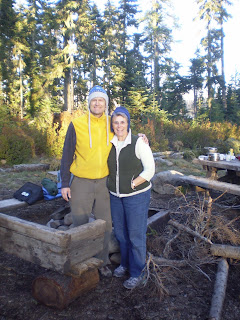 We weren't sure which of the two new tents we wanted to use, so we ended up setting both of them up! 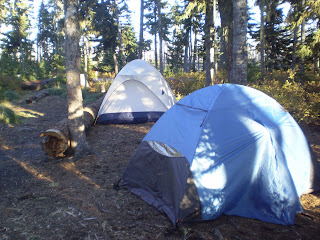 Once we had them up, we decided to sleep in the blue tent in the foreground. It's smaller than the other one, although it doesn't look like it in this photo. The white one has less wind protection, and since it's larger, it doesn't hold the heat in as well. Boy, were we glad we slept in the smaller tent! We were cold during the night. Mark got up about 4:00 to go potty, and he said there was frost on everything. When we got up this morning, we checked the temperature in the car, and it was 27 degrees!!

We were so cold we had to go for a hike to warm up. We hiked about 2 miles to Long Lake. The trail goes through a huge burned-out area. It looked desolate, although the views of Mt. Jefferson were beautiful. It was a gorgeous fall day--just a little cold, since we were camped at 5,000 feet! 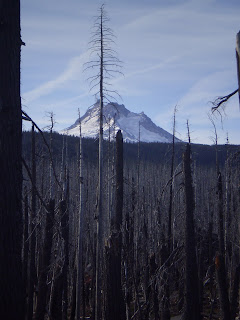 I think I get to camp and hike with the handsomest guy in the world. And he is wearing a very classy hat. 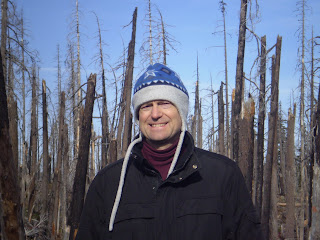 Once we had warmed up, we went fishing in the canoe. Well, Mark went fishing, and I paddled so he could troll. After a while he decided on a stationery fishing spot, so I got to read my book for a while. 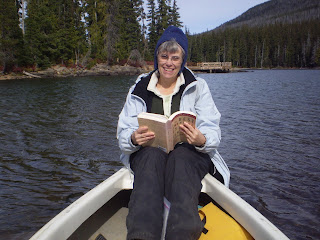 After we finished playing in the canoe we were cold and hungry, so we went back to camp for lunch. Good thing we had set up both tents, because we took our camping chairs and our lunch and ate inside the bigger tent! Oh, it was nice to get out of the wind for a while. Not much of a view, but it felt good to warm up.

Now we're home...tired, sunburned, and happy that we calendared another play day for ourselves. We feel ready to tackle the day-to-day challenges again because we got outdoors and away from our normal responsibilities. And like I told Mark, "Old people can't camp like this when it's cold, so we are not old!" This proves it...I think...
Posted by Kathy Haynie at 5:46 PM

Brrrr! I haven't been to Olallie lake in YEARS (like back when the kids were young) but I think we'll plan another trip there someday when it is WARM. I'm not saying that I'm "old", but I am saying that I prefer not to be shivering on my play days!

Glad you got to get away again. Be careful...get aways and play days are very habit forming! :) (Especially with handsome men wearing cute hats.)

By the way, did you use your self timer for that couple portrait?

No, we didn't use the timer. There were a couple of young adult women camping, who stopped by to borrow some matches. We loaned them matches, and then asked if they'd take our photo.

Then later the guy with his two kids came by to ask if he could borrow three plastic spoons. I didn't have any in our camping gear, but sure enough, I had 3 plastic spoons in the 72-hour kit in the back of the car, so we were able to be the "prepared older campers" in the campground. The three groups were the only ones (silly enough to be) out there. :)

How FUN!!! You both look great and so happy! You are so inspiring to me. Glad you were able to stay warm in such frosty weather!

Sounds like fun. That's funny that you set up both tents. :)