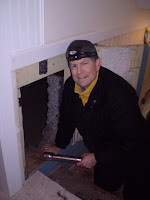 Setting:  Wednesday, church parking lot, heading to Ashley's father's house for the reception.
Mark and I plus a few other willing recruits had done a 15-minute take-down of the wedding paraphernalia in the relief society room--arch, ribbon, flowers, guest book, etc.  As we were driving away, Mark asked if we had the extension cord.  I wasn't sure.  "I'll go check," he said, and I idled the car while he zipped back into the building.  Came back out a minute later with the extension cord in hand.  It had been tucked under the curtain, behind the lighted arch, so it wouldn't show during the ceremony.
"Good job,"  I congratulated him.  We're middle aged after all, and we don't always remember things.
"It wasn't me," he countered.  That was a prompting from the Holy Ghost.
"The Holy Ghost cares about our extension cord?"  Something to ponder.
Setting:  last night 10:30 pm, our house, in the midst of an extraordinarily heavy rain storm (3" in 24 hours)
I was sitting in my favorite green rocking chair in the living room, fiddling with this blog on the laptop, and had a clear impression to go check on the basement.  Our house is 99 years old, and the basement leaks during regular rainstorms, so an extraordinarily heavy rainstorm bears watching.  I ignored the prompting for a few minutes, then headed for the basement.  Mark was there ahead of me.
Long story short:  we had a mess on hour hands.  The sump pump was on the verge of overheating, we had water flowing in faster than we'd ever seen it before, and then we discovered that part of the reason we had so much water was that the plumber had neglected to finish plumbing the line from the sump pump when we put in all new plumbing three years ago--a great plumber by the way, except for this one defect, but he was still disinclined to climb out of bed at 10:30 pm and help us with our little crisis.  Like I say, we had a mess on our hands, because the pump was discharging--flushing might be more accurate--five or so gallons of water every 15 seconds! into the crawl space under the kitchen, and from there the water merrily found its way right back into the basement along with the deluge from outdoors.
Mark--my hero--devised a temporary fix consisting of a short pipe, the hose to his shop vac, and lots of duct tape.  Then we adjusted the sump pump to pump the sump every minute instead of every 15 seconds, and then we (finally) went to bed with the alarm set for every hour to see if we were floating away, or if the pump had burned itself out, or...  You know how you lie awake and worry about things like that?  We didn't.  We were exhausted and slept like kittens. Stupid hourly alarm.
Happy ending.  The pump cooled down, the duct tape held, and the waters receded.  Today the rain let up, and Mark went to Home Depot for official-looking plumbing joints, and he is actually--my hero!--fixing the stupid pipe.
This morning, lying in bed, not wanting to get up, thinking about how both of us were prompted to go to the basement last night at the same time, and how Mark was prompted to check the crawl space, at which point we discovered the magical flushing sump system...
A couple of clear impressions have come to me.  (And let me just insert here that I realize that it's not like our basement issues were the Big News of Portland last night.  While we were dealing with our little drama, several drivers--not injured, thank goodness--were trapped in a huge landslide out on Highway 26 near Mt. Hood, and the road is closed for several days while crews clean up the tons of mess.)  But back to my impressions:
1.  We received these promptings--sump pump/basement last night, extension cord the day before--as blessings because we were faithful enough to show up when we were supposed to clean the church a couple of Saturdays ago.  That was in the middle of a record snowfall for Oregon City, and none of the other helper-types showed up, and then after we cleaned all morning, church got cancelled the next day anyway because there was too much snow.  But God doesn't care.  You show up and do your thing, and then these other little blessings that you didn't even know to ask for get dropped in your lap.
2.  But then again, these promptings are out there all the time.  It's like there's a Holy Ghost Instant Alert plan that anyone can sign up for.  You just have to learn to listen.  And in some weird way, doing things like showing up to clean the church actually help you listen better.  Who knew that God cared about our extension cord and our basement?  Who knew?
Posted by Kathy Haynie at 3:37 PM

God, apparently. Also, is Vati wearing a backwards baseball cap? How high school-Nate of him.

Sometimes I think that the Spirit doesn't use whispers with me at all---I think he must bellow at the top of his lungs (lungs would be metaphorical here)all the time and it is just my lack of sensitivity that makes it seem like an occasional whisper.